Wednesday, April 8
You are at:Home»Business»Malaysia to step up global halal initiatives 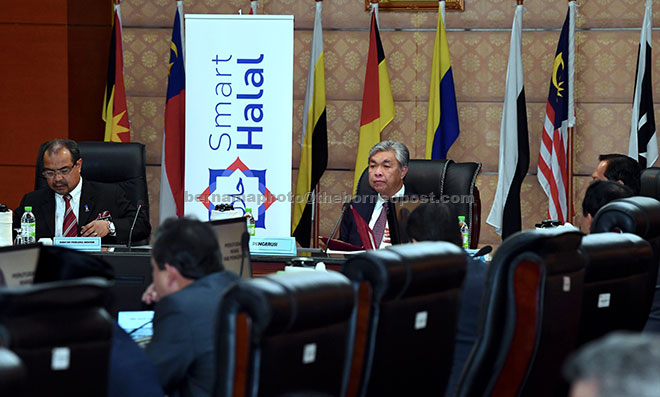 He said among the initiatives were the organisation of new international programmes such as Multaqa International Halal Authority Board (IHAB) and Halal Innovation and Technology Exhibition (HITEx).

“These programmes will be able to show the global community that Halal Malaysia is special and not limited to only halal products,” he said in a statement after chairing the Malaysia Halal Council meeting yesterday.

Ahmad Zahid said Malaysia would also capitalise on the halal industry which had been identified as a new economic source through the Islamic Economy Transformation Programme, which is seen as being able to transform the Islamic economy to be more competitive and forward-looking.

At the meeting, he also launched the SMART HALAL application (app) which is able to facilitate users to obtain information relating to the Malaysia Halal Validation status faster.

Ahmad Zahid said the development of the app was outcome of the cooperation between the Malaysian Communications and Multimedia Commission and the Department of Islamic Development Malaysia (Jakim) through the National Blue Ocean Strategyinitiatives.

The app can be downloaded via telephone from Google Play Store or Apple App Store.

A total of nine presentation papers from Jakim, the Ministry of International Trade and Industry and Bumiputera Agenda Steering Unit were discussed in the meeting, he said.

Among them were the Malaysian Halal Certification Development Initiative report; latest updates on the Halal Industry Master Plan 2018-2030; organisation proposals for Multaqa IHAB and HITEx 2018 and proposal for the Islamic Economy Transformation Programme.

Also deliberated were the latest updates on the Halal Internationalisation Initiative in the Industry Development Framework; the Bumiputera facilitation Fund status; and the outcomes of the Halal Fiesta Asean 2017 and Malaysia International Halal Showcase 2017 events. — Bernama