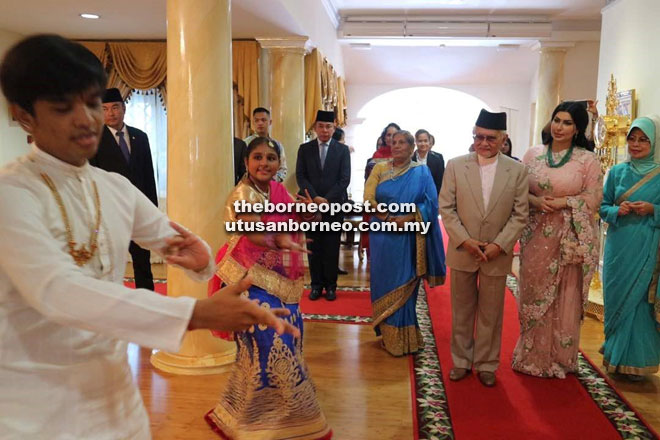 Taib and Raghad being welcomed on arrival at the function.

When launching the book ‘Sarawak’s Indian Women Heritage’ at the Astana on Monday, Taib commended the Indian community for their tolerance and the give-and-take attitude, apart from blending well with people of other races.

“The publication of the book goes to show that Indian women in Sarawak are on par with others. Even though their number is small, their achievements are something Malaysians can be proud of,” he said, and urged them to go to greater heights in various fields.

While wishing them Happy Deepavali, Taib also hoped that they would maintain racial harmony and unity for the sake of the state’s stability.

Minister for Welfare, Community Well Being, Women, Family and Early Childhood Development Dato Sri Fatimah Abdullah, who is also patron of Indian Women Assocaition of Sarawak (Siwa), congratulated the association for their achievement in coming up with the book that highlights several professionals and high achievers among the community.

Fatimah acknowledged that in the beginning most of the Indian women were just playing the role of housewives but today their roles have been extended to nation-building.

Despite their successes in the modern era, she was glad to note that they are helping to promote and protect the Indian culture and traditions.