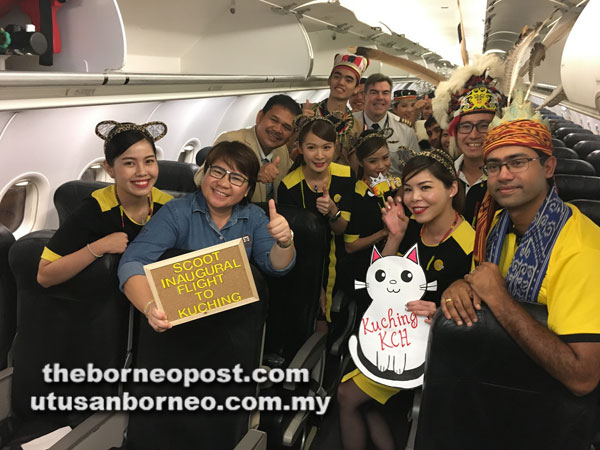 KUCHING: Scoot, the low-cost arm of the Singapore Airlines Group, launched its inaugural flight from Singapore to Kuching, the first-ever destination in East Malaysia for the award-winning value airline on Sunday night.

The new Singapore-Kuching route with daily direct flights will be Scoot’s fifth destination in Malaysia, after Ipoh, Kuala Lumpur, Langkawi and Penang.

The inaugural flight landed at the Kuching International Airport (KCH) at about 9.55pm on October 29, 2017, with passengers on Scoot’s A320 aircraft receiving a warm welcome with a traditional dance organised by the Sarawak Tourism Board.

Commenting on Scoot’s inaugural flight to Kuching, Vinod said, “Malaysia is a very important market for us as we see growing interest from Singaporeans to travel to different parts of our neighbouring country and vice versa.

“Hence, we are excited to launch our services to Kuching, which brings us a step closer to our objective of steadily increasing our network in the region. Through this, we also hope to continue enriching our Malaysian guests’ travel experiences with a healthy dose of our unique Scootitude on board.”

“Not only will this offer the people of Sarawak and the Borneo region a new avenue to fly to popular destinations, we are also immensely pleased to welcome Scoot and its passengers from the region and beyond to visit our beautiful state that is a prime destination for culture, nature and adventure tourism. We are confident that the launch of Scoot’s direct flight between Kuching and Singapore will further help us to promote Sarawak and Kuching as the preferred nature tourism destination.”

The addition of the Kuching service brings Scoot’s current network to a total of 60 destinations in 16 countries. Scoot has also previously announced on 25 July 2017, in conjunction with the completion of the Scoot-Tigerair integration under the single Scoot brand, that it plans to inaugurate services to four other destinations – Kuantan in Malaysia, Honolulu in the US, Harbin in Northeast China and Palembang in Indonesia.

Scoot took to the skies in June 2012 and merged with Tigerair Singapore in July 2017, retaining the Scoot brand and positioning it well for a new chapter of growth. Scoot has carried over fifty million guests and now operates a fleet of 15 state of the art, widebody Boeing 787 Dreamliners and 23 young and modern Airbus A320 family aircraft, with five more Boeing 787 Dreamliners and 39 Airbus A320neo aircraft on order.

Previous ArticleMalaysia to consider FTA with US if TPPA does not materialise, says Najib
Next Article 65 bowlers at 9-Pin Tap Special