Friday, December 3
You are at:Home»Business»Local equity market to stage another ‘relief rally’ after GE14 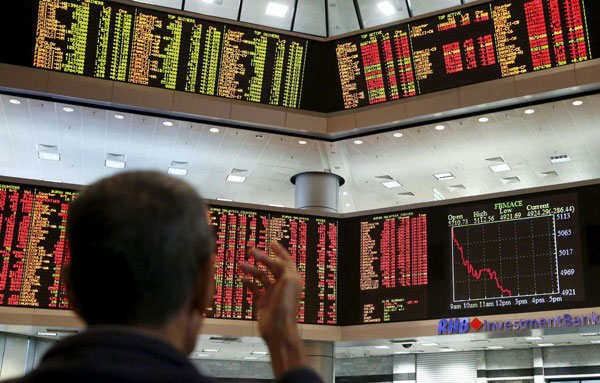 Based on the market’s reaction following GE13 in 2013, analysts believe that the local equity market could stage another ‘relief rally’ after the upcoming GE14 as it currently is showing similar market movements seen in the months leading up to GE13. — Reuters photo

KUCHING: Based on the market’s reaction following the 13th General Election (GE13) in 2013, analysts believe that the local equity market could stage another ‘relief rally’ after the upcoming GE14 as it is currently showing similar market movements seen in the months leading up to GE13.

MIDF Amanah Investment Bank Bhd (MIDF Research) noted that previously, the local market was clearly perturbed during pre-GE13 months as the nation’s political equations have totally changed since GE12 and so has the market psyche in regard to national election and its probable outcomes.

Consequently, it observed that in the months leading up to GE13, the local equity market was clearly perturbed by the impending election as evident by its stark underperformance vis-à-vis emerging Asean peers.

However, on the following Monday, after GE13, the local equity market reacted by staging a ‘relief rally’ with the FBM KLCI reaching a fresh record high the day after.

It also pointed out that the local bourse surged 3.38 per cent to close at 1,752 points while foreign investors loaded up RM1.43 billion net of Malaysian equity on the Monday after the election, which has never been surpassed ever since.

With that, MIDF Research believed that the next general election is expected to generate the same reaction on the local market. Recently, it pointed out that the market is showing similar performance in the months leading up to the general election.

“It seems that the FBM KLCI is at it again leading up to GE14, underperforming against its emerging Asean peers. Therefore it is highly likely that the FBM KLCI will once again show a reversal of trend, outperforming its regional peers if the federal ruling incumbent were to remain in power post-GE14,” it said.

“On this score, looking at the previous GE13, while FBM KLCI movements were relatively muted prior to the election, the market barometer staged a postelection relief rally as uncertainty over the leadership was removed.

“Henceforth, if the GE14 outcome favours the federal incumbent, we can expect another post-election rally (albeit smaller magnitude vis-à-vis post-GE13) coupled with commendable foreign inflow,” the research team opined.

On that note, it expected that federal ruling incumbent may benefit from a fractured opposition hence possibility of three-corner fights.

It added that Sungai Besar and Kuala Kangsar by-elections in mid-2016 were the most recent examples of three-corner fights won by BN with huge majority; a stark contrast to the razor-thin margins in 2013.