Wednesday, February 19
You are at:Home»Business»Najib, Ma flag off 1,972 export ready SMEs onboard DFTZ 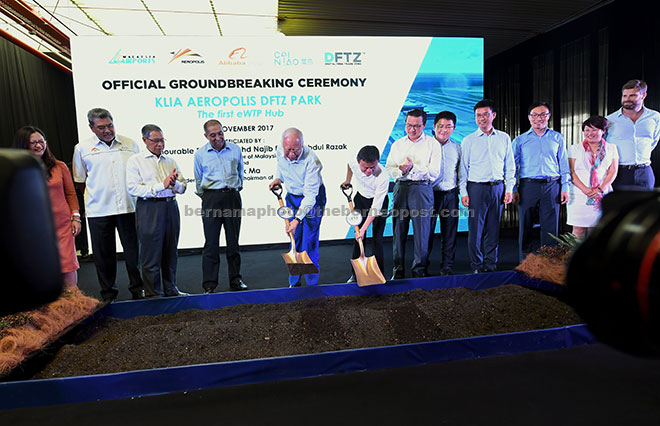 The world’s first DFTZ is a key component in driving Malaysia’s digital economy, facilitating SMEs to capitalise on the convergence of exponential growth of the Internet economy and cross-border trade.

“SMEs have the power to transform the economy.

They are ambitious, nimble and have the potential to create high value employment.

“They have the power to move Malaysia to become a high-income nation,” said Prime Minister Datuk Seri Najib Tun Razak after officiating the groundbreaking ceremony, together with Ma,  for the KLIA Aeropolis DFTZ Park.

The launch of the KLIA Aeropolis DFTZ Park is Alibaba’s first regional eFulfillment hub outside China.

It is expected to double the growth of Malaysia’s air cargo volume from the current level of about 700,000 tonnes a year to 1.3 million tonnes a year within ten years.

Ma, the Chinese business magnate, said he believed the collaboration was the beginning of a long-standing strategic partnership between the two nations.

“Alibaba Group definitely plans to stay and strengthen our presence here,” he said.

The eFulfillment hub  is equipped with latest technology, including sorting, shelving and pick-pack facilities, lighting industrial units that allow minor repairs and assembly prior to shipping goods, customs inspection and quarantine area and category specific facilities such as secure ware, temperature controlled storage and other facilities. — Bernama