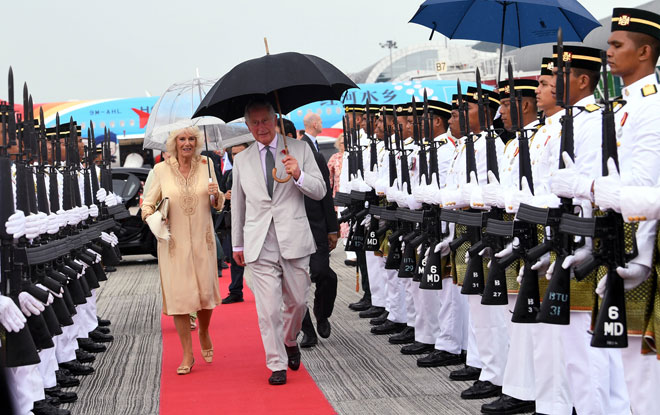 Their Royal Highnesses walking between the guard-of-honour mounted by military personnel from the 6th Battalion Royal Malay Regiment before departing for India from the Penang International Airport yesterday. — Bernama photo

GEORGE TOWN: Prince Charles, the Prince of Wales, and his wife Camilla, the Duchess of Cornwall, were given a red carpet send-off here yesterday upon the conclusion of their seven-day official visit to Malaysia.

Their Royal Highnesses arrived at the Penang International Airport at about 11 am and walked past a static guard-of-honour, shielding themselves from a drizzle with an umbrella.

Prince Charles and Camilla flew off to India on a British Royal Air Force aircraft which took off at 11.27am.

Prince Charles and Camilla arrived in Kuala Lumpur last Thursday on their maiden visit to Malaysia, which commemorates the 60th anniversary of bilateral relations between Malaysia and the United Kingdom.

Besides Kuala Lumpur, Their Royal Highnesses also visited Sarawak, Perak and Penang over the span of seven days from Nov 2 to 8.

worship in the heritage enclave here on Tuesday, as well as the heritage areas and the Royal Malaysian Air Force Base in Butterworth.

Their Royal Highnesses also attended the Sandhurst Alumni Reception at the Eastern and Oriental Hotel and concluded their visit to Penang by attending the Penang Peranakan Museum Reception in Church Street.

Their visit to Malaysia is part of a 11-day tour to Singapore, Malaysia and India from Oct 30 to Nov 9, aimed at strengthening ties between Britain and Asia.

Previous visits to Malaysia by members of the British Royalty includes that from Sept 20 to 23, 1998, by Her Majesty Queen Elizabeth II and the Duke of Edinburgh who attended the official opening of the 16th Commonwealth Games in

Kuala Lumpur, and the visit by Prince William and Kate Middleton, the Duke and Duchess of Cambridge, in September 2012. — Bernama