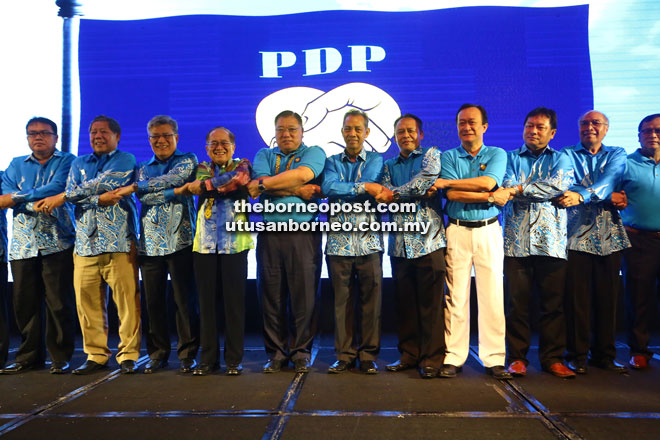 Tiong (fifth left) and Uggah (fourth left) joined by the other PDP leaders in a symbolic gesture after the launch of the new logo, which depicts two hands engaged in a handshake and shaped like a heart. — Photo by Muhammad Rais Sanusi

KUCHING: Fresh from a rebranding that includes a new name and a new logo, Progressive Democratic Party (PDP) now plans to expand to Selangor, Negri Sembilan and the Klang Valley to add to the six divisions already established in Johor.

“We are just accommodating the Sarawakians now living and working in the peninsula. This has nothing to do with peninsula-based BN parties coming over here. That’s different,” he told reporters after the launch of the new name and logo at a hotel here on Sunday night.

PDP’s name and logo was approved by the Registrar of Societies (ROS) on Feb 3 this year, in a move said to be a new historical chapter for this multiracial party formed in 2002 with current total membership of over 97,000.

Meanwhile, Uggah also told reporters there was no issue of peninsula-based BN parties coming to Sarawak.

“There are now many Sarawakians in the peninsula. In Johor, I was told there are over 40,000 Sarawakians working there, but many of them could not come back to vote during elections.

Earlier in his speech, Tiong, who is also Bintulu MP, said PDP had identified the areas for expansion in the peninsula, which includes setting up three divisions in Selangor, two divisions in Negri Sembilan and several divisions in the Klang Valley.

He revealed that so far, PDP already had six party divisions in Johor – in the state constituencies of Tiram, Johor Jaya, Permas, Skudai, Nusajaya and Senai – with total membership of 6,000, out of whom 3,000 are registered voters.

“Moving forward, we will expand our network to Selangor, Negri Sembilan and the Klang Valley. Our presence there is merely to ensure BN wins in the seats (where we have our party divisions) through votes from Sarawak registered voters who domicile there,” he said.

Tiong also said the exclusion of the word ‘Sarawak’ from PDP did not mean the party does not love or is not loyal to its homeland, stressing the party’s struggle is for Sarawak.

He explained the new name was chosen in line with the party’s aim to ensure more Sarawakians domiciled outside the state, could contribute to and bolster the party’s continuity in the states in the peninsula.

“As the party president, I want to put on record my undivided support to the government led by the Chief Minister. We regard the Chief Minister and the Deputy Chief Ministers as good leaders who practise power sharing, fair treatment and profess politics of compromise and consensus.

“I hope the Deputy Chief Minister (Uggah) will extend our message to the Chief Minister that ‘no matter whether you are up or down, in happiness or sadness, in good time or bad time’, PDP members and I will stand solidly behind the Chief Minister to ensure he can lead Sarawak effectively. This is our promise to you sir and to your leadership,” he said.

The Chief Minister in his speech read by Uggah congratulated PDP for its new name and logo and said PDP had always remained loyal to BN despite changes made to the logo and name.

Abang Johari hoped the concept of power sharing, consultation, mutual respect and co-operation would continue to be adhered to in the big family of BN.