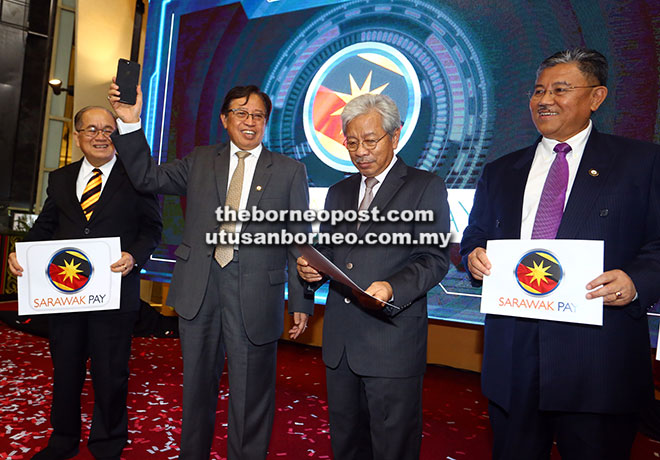 Abang Johari (second left), accompanied by (from left) Uggah, Masing and Morshidi, at the launch of SarawakPay. — Photo by Muhammad Rais Sanusi

The SarawakPay e-wallet can be topped up through Internet banking or credit card.

For the first phase pilot rollout, BNM only allows each top-up to a maximum of RM200.

However, the state government will apply to BNM to expand the balance capacity up to a maximum of RM1,500 next year.

This feature is believed to be convenient in facilitating cashless payments at SEDC hotels’ eating outlets.

The ‘Scan & Pay’ feature is also deployed for payments of monthly consumption bills of Sarawak Energy and Kuching Water Board, assessment bills of all 26 local councils in the state as well as 10 outlets of Grand Margherita Hotel and 14 outlets of Riverside Majestic Hotel.

The state government is expected to expand the ‘Scan & Pay’ feature next year to all government agencies and other utility bills, local retailers and merchants in Sarawak.

Besides that, the state government will also apply to BNM to include features such as Wallet Transfer, Pay Anyone, Go Dutch, Supplementary Wallet and Standing Instruction.

It is understood that other payment channels such as Paybills Malaysia and payment at the counters will continue to be available to the community.

The SarawakPay app can be downloaded from Google Play (Android) and App Store (iOS).