Wednesday, February 1
You are at:Home»News»Nation»MAG pledges zero-tolerance for human, wildlife trafficking
For the freshest news, join The Borneo Post's Telegram Channel and The Borneo Post on Newswav. 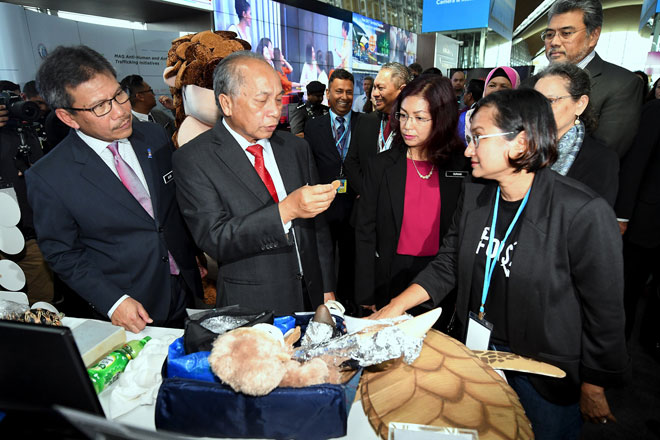 SEPANG: Malaysia Aviation Group (MAG) yesterday pledged zero-tolerance for human and wildlife trafficking in line with the group’s ongoing efforts to support the work of enforcement in fighting against these illegal activities.

Malaysia Airlines Bhd (MAB) executive counsel Nik Azli Abu Zahar said MAB had taken an active stance against human and wildlife trafficking, with most recently signing the Buckingham Declaration in June this year, in support of efforts to prevent trafficking and transportation of illegal wildlife and their products.

He said wildlife trafficking was the fourth largest organised crime activity after human trafficking, drugs and counterfeiting, and it is an industry that generates more than US$20 billion in profits annually, and reduces biodiversity and destroys fragile ecosystems.

“Our serious commitment is in the hope of clamping down on the trade chains for wildlife worldwide. So, today we declare zero-tolerance policy regarding illegal wildlife trade, increasing awareness among staff and passengers as well as providing staff training to identify and report suspected illegal

wildlife, and human trafficking,” he said at the launch of MAG Anti-Human and Anti-Wildlife Trafficking Road Show at the Kuala Lumpur International Airport (KLIA) here.

Nik Azli said MAG was also working closely with the Anti-Trafficking in Persons and Anti-Smuggling of Migrants Council (MAPO) on human trafficking, which is a crime that ranks among the worst forms of human rights abuse and is the lifeblood of many organised criminal groups.

“Criminals rely heavily on air transportation to smuggle victims from one place to another and we wish to put a stop to this. We train and empower more than 4,000 front line staff, especially cabin crew, to be alert and monitor passengers who behave suspiciously, to be our eyes and ears in the skies and on ground to report any suspicious activities,” he said.

He said MAG developed its policy against human trafficking in August last year and had since issued a circular to all its business partners and stakeholders to stress on the seriousness of this crime and close cooperation needed in stemming this illegal activity.

Meanwhile, Masir, in his speech stressed that it was crucial for the government to work side by side with the industry players and non-government organisations (NGOs) in promoting awareness to the people of what human and wildlife trafficking, and how they could contribute in every way to combat these crimes.

“The Anti Trafficking in Persons and Anti-Smuggling of Migrants Act 2007 has been revised and amended twice in 2010 and 2015 for wider enforcement and prosecution powers as well as protection for trafficked victims. Let’s take a tough stance against the crimes of human and wildlife trafficking. We must stop these criminals collectively,” he added.

Masir also spent some time visiting booths at the exhibition in conjunction with the three-day roadshow beginning today to educate the public on human and wildlife trafficking issues at Level 5 (Departure Hall), KLIA. —Bernama