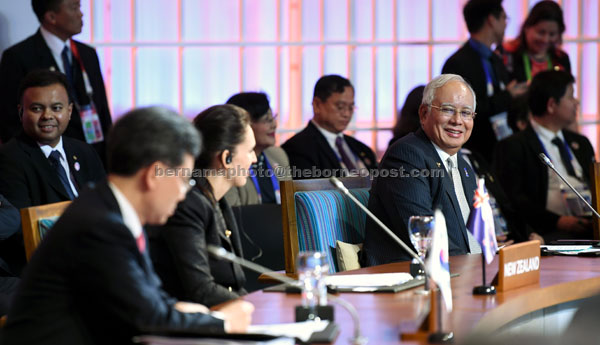 MANILA: Malaysia and Indonesia view the export restriction against palm oil into the European Union (EU) very seriously and are ready to take joint action to counter the discrimination which will otherwise  jeopardise more than 18 million smallholders in both countries, says Prime Minister Datuk Seri Najib Tun Razak.

The premier and President Joko Widodo raised the matter during the ASEAN-EU Summit which was also attended by EU President Donald Tusk.

“I emphasised the fact that the discrimination will adversely affect the palm oil industry, jeopardise the income, welfare and livelihood of 600,000 smallholders in Malaysia and 17.5 million of them in Indonesia,” he told Malaysian journalists Tuesday night.

Najib highlighted the issue to Tusk, describing it as ‘very serious’ and got the attention of the EU President that he would personally look into the matter.

Asked if Malaysia and Indonesia would take counter action if the EU remained adamant on the matter, the prime minister said he would raise the matter with Jokowi during the annual consultation to be held in Kuching on November 22.

“If we act independently, the impact will not be that effective. But, if we undertake joint action, it will have a positive and marked effect as Malaysia and Indonesia together account for 82 per cent of global palm oil output,” he added.

The European Parliament adopted a resolution in April that only environmentally sustainable palm oil can be imported into the European Union after 2020.

It called for a single certified sustainable palm oil scheme for Europe-bound palm oil exports to make sure that the oil was produced using environmentally sustainable methods and prevented deforestation.

The resolution said the current certification scheme was flawed and did not meet internationally accepted standards on sustainability. — Bernama

Previous ArticleForbes: Quek family seventh richest in Asia
Next Article Every single sen given out as MRP, RTP properly accounted for – Soon Koh