Thursday, June 4
You are at:Home»News»Sarawak»Preparing for the future

Abang Johari says SarawakPay is to meet aspirations of the youth, not just for show

KUCHING: The state government is not launching SarawakPay just to show that Sarawak has become technology savvy.

“The future is for the young people and we are doing this not for us but for the young to be able to embrace the global economy. We have no option but to embrace technology in our efforts to develop our state and give a better future for Sarawakians,” he pointed out.

He said the state had to launch SarawakPay as the entire world is changing its means of conducting business transactions.

Abang Johari feared that Sarawak would risk being left behind if the state government did not initiate the digitising of its economy.

The chief minister plans to extend the newly-launched app to the private sector and eventually link it with other electronic wallet (e-wallet) providers in the region.

However, he added that the state government would have to seek approval from Bank Negara Malaysia (BNM) to get connected with regional e-wallet providers.

“We hope SarawakPay can be extended to the private sector and we will link SawawakPay with e-wallet transaction providers in other countries.

“Of course, we have to get approval from BNM to be connected regionally,” he said when launching the cashless mobile payment app at the State Legislative Assembly Complex here yesterday.

Abang Johari said he looks forward to SarawakPay emerging as the norm for business transactions among Sarawakians.

He added that his predecessors, Head of State Tun Pehin Sri Abdul Taib Mahmud and the late Pehin Sri Adenan Satem, had envisioned Sarawak to be a developed state.

“It is our job to continue what they want Sarawak to be. We must have a new way of developing Sarawak not only for urban but also rural areas,” asserted the chief minister. 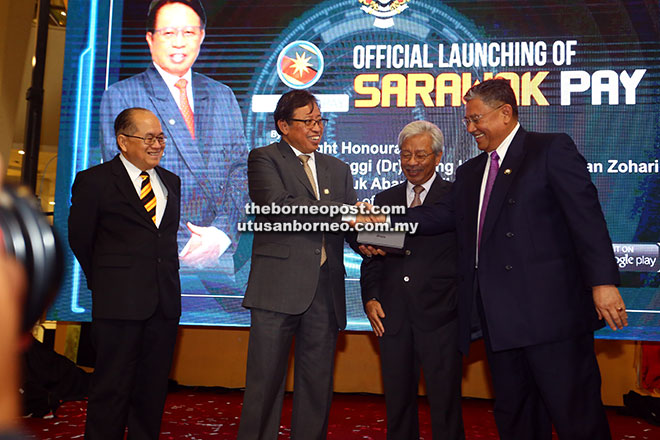 The state government’s development plan would be inclusive so that rural areas would also enjoy progress.

According to him, the only way to move the rural areas forward is by connecting them with internet by means of fibre optic and cloud computing.

“The rural people must be connected or I fail as a chief minister. This is not to show that we are technology savvy but we have embraced the modern way of doing business.

“If we don’t do this, we are not doing our duty. We have to look forward to the next 13 years and Sarawak must develop the infrastructure by 2030 to enable the people to have higher income,” he stressed.

Abang Johari said many Sarawakians who had been serving abroad had indicated that they would be returning to the state for the development of digital economy.

“They are coming back to set up their own lab like robotic arm manufacturing because they feel that there is a future for Sarawak.”

He said the state government would stay focused and on course in the development of digital economy.

“I won’t be distracted by whatever comments made by other people. I will concentrate on our roadmap to give a good future for our Sarawakians,” he pledged.