Saturday, August 13
You are at:Home»News»Court»A year’s jail, a stroke of the cane for cheating 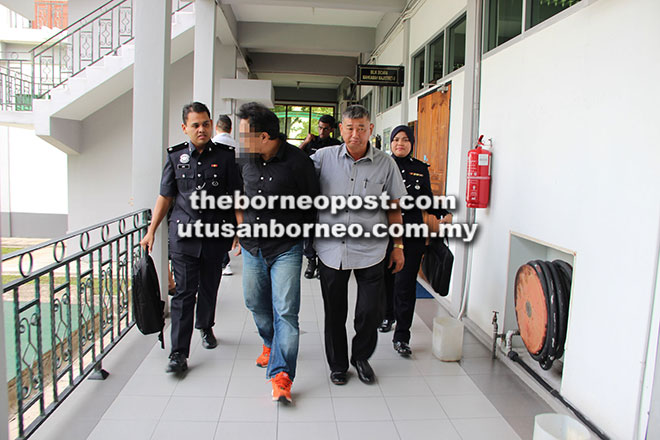 Annuar being led from the court.

SIBU: A 36-year-old man was sentenced to a year in jail and a stroke of the cane by the magistrates’ court here on Thursday after he pleaded guilty to cheating and dishonestly inducing delivery of property.

Annuar Hamdi was charged under Section 420 of the Penal Code which provides for imprisonment of one year to 10 years with whipping and/or a fine.

He committed the offence on Feb 23 this year at 9.20am in Sibu Jaya.

He cheated Atan Leman, 49, of RM700 by saying that he could find a job as an electrical engineer in Pulau Labuan for him (Atan).

He told Atan that the money was for medical check-up, passport and air ticket needed in getting the job.

Annuar is also facing another charge with 11 counts of cheating and dishonestly inducing delivery of property.

He allegedly cheated 11 others aged between 18 and 59 using the same modus operandi between Feb 23 and April 6 this year at different locations in Sibu. The money involved totalled RM10,760.

Annuar is to appear in court again on Nov 21.

Previous ArticleFajar’s DipOSH students get hands-on in fire drill
Next Article Include prioritisation of religious teachers under proposed devolution of power to Sarawak, says Jemoreng assemblyman