Monday, January 24
You are at:Home»News»Nation»Najib: Moderation a necessity for Malaysia 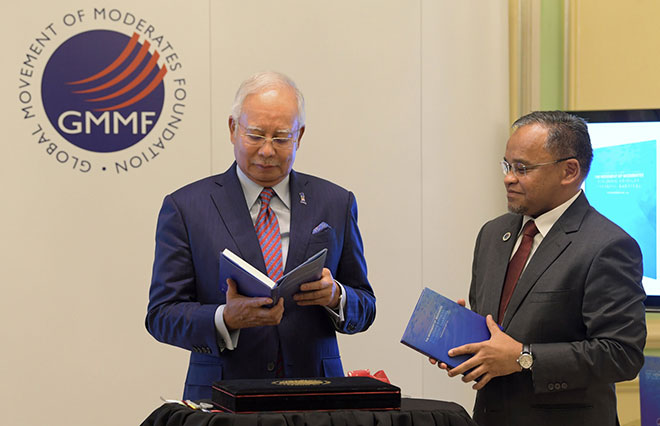 Najib takes a closer look at the GMMF book after its launching while Dr Nasharudin looks on. — Bernama photo

PUTRAJAYA: ‘Wasatiyyah’ or moderation is not only a part of Malaysia’s tradition but a necessity for Malaysians in a country with a diversity of faiths and ethnicities, Prime Minister Datuk Seri Najib Tun Razak said yesterday.

This, however, would only be the case if moderation was practised with acceptance, respect and true mutual understanding, he said.

“This is not always easy for everyone. Moderation is not a soft option. It is something that we have to strive to make a part of our lives, an integral part of the way we think about other people and our actions.

“This is why I have championed moderation as the path of the best for moderation is the path of human perfection, an idea that is taught to us by Islam as well as all other religions.

“We understand and appreciate the differences between us, and remember that they are in fact enriching. Indeed, they make Malaysia what it is,” he said at the launch of the Global Movement of Moderates Foundation (GMMF) new website and two publications at the Putra Perdana building here.

Najib, who is also the Finance Minister, said Wasatiyyah carried the message of doing good with steadfastness, justice, brotherhood and righteousness, as well as the rejection of all forms of evil such as extremism.

“Our hearts are gladdened when our fellow countrymen of other faiths celebrate their festivals, and we wish them well. That is how it should be, and it is a manifestation of the path of moderation,” he said.

Seven years ago, Najib said, he mooted the establishment of a Global Movement of Moderates (GMM) at the United Nations General Assembly in New York and emphasised in his maiden speech that the real issue was not between Muslims and non-Muslims but between moderates and extremists of all religions.

Explaining further, he said: “We do not have to look far to realise the crucial importance of practising moderation. When we see what happened in Marawi City recently, we see the deadly effects of extremism, of groups allied to Daesh, which itself has brought terrible devastation to large parts of Syria and Iraq, and has inspired appalling attacks around the world.”

He said Malaysia had not been spared the shadow of Daesh’s barbarity either, but the country was thankful to the heroic efforts of the Royal Malaysia Police in foiling 16 attacks on Malaysian soil, which included two during the Southeast Asian Games closing ceremony and National Day celebrations at Dataran Merdeka.

“There was one successful Daesh-linked attack in Malaysia, in June last year. Although several were injured, mercifully no one died. Now there are many ways we can resist and combat this scourge. It is fortunate the government has introduced a raft of counter-terrorism legislation in the last few years in order to have appropriate laws to deal with this scourge.

“But we can and must also combat this through the promotion of moderation. This is not just for us. This is for the younger generations, and for generations to come,” he said, adding that Malaysia also proudly stands shoulder to shoulder with other nations in the Global Coalition Against Daesh on the international level.

Najib said the efforts and work of the GMMF were part of the reason why Malaysia’s leadership, in promoting moderation in de-radicalisation and opposing extremism in all its forms, had been recognised all over the world.

He said the close cooperation between the Foreign Ministry and GMMF had led to more robust promotion and engagement about the importance of moderation throughout the world, culminating in Malaysia’s upcoming tabling of a resolution at the 72nd United Nation’s General Assembly on moderation and the GMM initiative.

“So I commend the sterling work the GMMF has done and continues to do. I trust that the new website will bring their work and their mission to even more people, and will encourage more and more to join us on this road to peace, co-existence and harmony,” he said.

The first publication is a compilation of Najib’s speeches on moderation and GMM while the other is a series of papers and discourses of GMMF’s engagements throughout the past two years, he said.

“The new domain name of gmmoderates.org is a rebranding exercise which includes the key features of a responsive web, designed for social media integration and search engine optimisation. With these website features, stakeholders are enabled to stay connected with GMMF anytime and anywhere, and they will have a better idea about GMMF and our initiatives,” he said.

He said the launch of the new website and publications clearly highlighted the commitment of GMMF in adding value to its role as a moderation resource centre by having created the engagement platforms for the moderates to take collective action for a better world. — Bernama