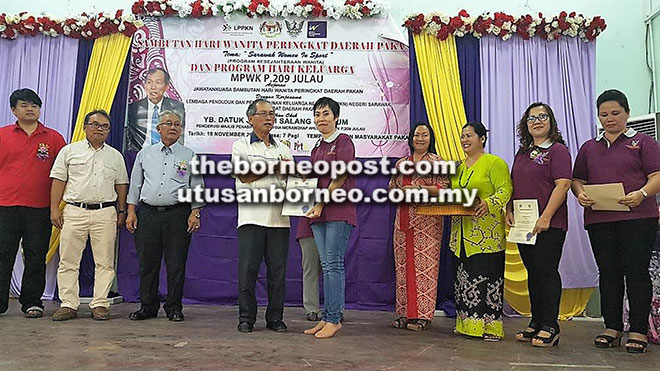 Salang (fourth left) presents a letter of appreciation to Teresa Fitz, who is a member of the organising committee.

SIBU: The coming generation might see more women becoming the breadwinners and their husbands, the homemakers.

Julau MP Datuk Joseph Salang believes that such a scenario would be the next trend as more women earn more than men.

“Even now, we can see more female undergraduates at our universities – it is estimated that out of 10 undergraduates, six are women,” he said at the start of Pakan District Women’s Day 2017 celebration in Pakan community hall on Saturday.

Salang, who is also chairman of 1Malaysia Sarawak Advisory Council (1MSAC), said in a scenario where the women earn more than their husbands, it would be logical for their husbands to allow them to continue working.

“Of course, there must be mutual consent and financial agreement between each spouse in this regard.

“In fact, this (scenario) is already happening in Kuching, involving the professionals,” he said, pointing out that this is also the trend in many developed countries.

“Initially, this might be a cultural shock to us; still, we better be prepared for it.

“The men should not perceive this as a threat, allowing their marriage to break down and creating more and more single mothers,” he said.

Meanwhile, Salang also advised the rural womenfolk to explore suitable business opportunities, which could lead to them to having more financial independence.

Commercial farming would be among these potential ventures, he added.

“When you have more cash, you can provide more to your family for them to have better standard of living.”

Later at the event, Salang announced a grant of RM20,000 to allow the organising committee to hold more activities set to benefit the womenfolk across Pakan.

He then presented certificates of appreciation to members of the organising committee, led by Hellen Mawar.

In her remarks earlier, Hellen called upon fellow women voters to render their fullest support to Salang, who has been re-nominated to defend Julau in the next parliamentary election.