Thursday, June 24
You are at:Home»News»Sarawak»‘International Halal Awards to be introduced next year’ 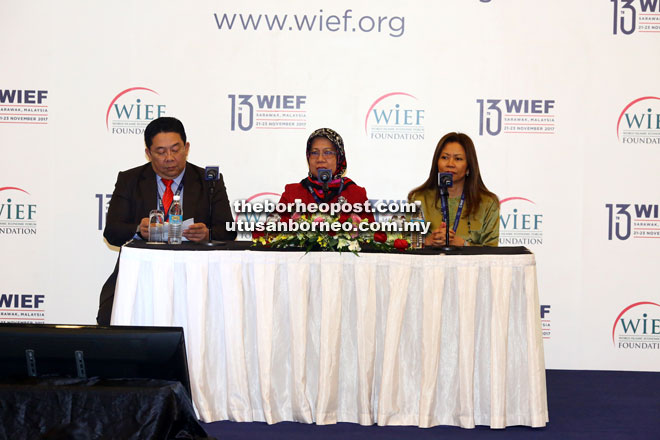 Hafsah, flanked by Sirajuddin on her right and Serunai Commerce chief executive officer Amnah Shaari, announces the introduction of the International Halal Awards during the conference at BCCK.

KUCHING: The International Halal Awards will be introduced next year.

It is learnt that the award programme is a joint initiative by SME Corp, Islamic Development Department Malaysia (Jakim) and Serunai Commerce Sdn Bhd.

“The awards will be given to international halal-certifying bodies and halal production companies, as an effort to promote and grow the halal industry as well as to contribute to the global halal economy,” she told reporters.

“This award programme will be held annually with the mission to promote and support the growth of the halal industry and the benefits of halal certification for globally distributed goods and services,” she said, adding that the awards would represent the industrial shift towards becoming more consumer-centric and also recognise the brands and initiatives that would spur the halal industry further.

Meanwhile, Hafsah disclosed that investments into the Malaysian halal industry stood at US$3 billion last year, having created 11,000 new jobs and contributing to halal food exports worth over US$10 billion.

She added that with growth projections being maintained at 20 per cent year-on-year since 2012, the potential of the halal economy had remained ‘unequalled’.

“Malaysia has invested heavily and proactively over the years to boost what is recognised today as one of the fastest-growing consumer segments in the world – representing a huge proportion of global trade with a current market value of US$6.4 trillion.”

In his remarks, Jakim Halal Hub Division director Datuk Dr Sirajuddin Suhaimee said over the past several years, the department had been engaging certification bodies from around the world in order to widen the access for acceptance of Malaysia’s halal certification regulations.

“We can confidently say that the Malaysian halal standards stand as a global benchmark in excellence.

“The International Halal Awards are really a natural extension of Jakim’s global standing in the industry as we use it to highlight and reward those who go above and beyond when it comes to halal-compliance, innovation, excellence, integrity, transparency, academia and technology,” he said.