Saturday, August 15
You are at:Home»Business»Bank Negara to enforce crypto regulation in 2018 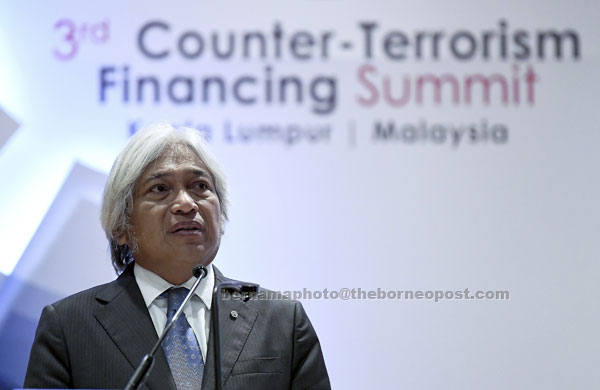 Governor Tan Sri Muhammad Ibrahim yesterday said the move aims at preventing the abuse of the system for criminal and unlawful activities and ensuring the stability and integrity of financial system. — Bernama photo

Governor Tan Sri Muhammad Ibrahim yesterday said the move aims at preventing the abuse of the system for criminal and unlawful activities and ensuring the stability and integrity of financial system.

“We need to prepare ourselves, as according to many pundits, digital currencies will become the new norm.

“The advent of digital currencies as some have forecast, will mark the beginning of a new era in the financial sector. As authorities, we cannot be oblivious to these developments,” he said in his welcoming remarks at the Third Counter-Terrorism Financing (CTF) Summit 2017 yesterday.

Muhammad said the adoption of artificial intelligence, machine learning and big data technology were tools that would likely be imperative, as suspicious transaction become more complex and harder to detect.

“As we learned from the Innovation Forum at this Summit, the use of artificial intelligence and big data will have the potential to increase efficiency and accuracy of assessments that is essential in a dynamic environment.

“The banking sector needs to adopt the latest and most advanced technologies to improve its risk management framework,” he added.

Greater access to intelligence information for financial institutions and rising threat from the Islamic State of Iraq and the Levant (ISIL) had resulted in the upward trend of reporting of Suspicious Transaction Reports (STRs), he said.

The governor said that the central bank is also in the midst of finalising the details of a new requirement for the Banking and Money Services Business sector to report in high-risk areas.

“The high-risk areas will be determined based on the law enforcement agency’s intelligence on areas that they view may pose higher risks for funding of terrorism activities,” he said.

This, he said, was consistent with the Terrorism Financing Regional Risk Assessment findings at the second CTF Summit in Bali last year, where one of the priority actions identified was for FIUs to improve the visibility and insight into the nature of terrorism financing in the region.

Muhammad said the idea was intended to help FIUs gain better insights into the role of financial and transit hubs in regional and international terrorism financing network.

“There is no doubt that rapid technological developments have offered immense potential for economic growth. Unfortunately, they have also spawned new ways for terrorist organisations to acquire, move and manage their funds.

“In light of this development, the role of financial sector as a bulwark against terrorist financing become even more critical. The financial system must always be in a state of readiness to identify and effectively prevent any emerging risk of terrorism financing,” he added.