Sunday, September 25
You are at:Home»Lite Stories»Football a refuge for children who seek asylum in Australia 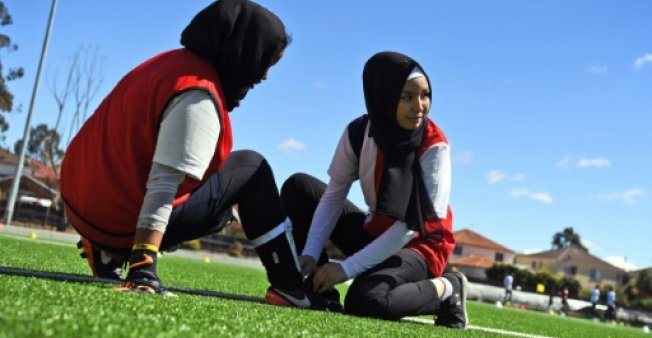 SYDNEY: With a whistle hanging from her neck as she shouts instructions in perfect English, teenager Athmar Habeb looks very much at home refereeing a football match in Sydney.

Yet it was only four years ago that Habeb had to flee her war-torn Iraqi homeland, arriving in Australia aged 12 with her family and knowing only three English words — salt, apple and eggs.

Her love of the beautiful game led her to Football United, a programme helping refugees integrate in Australia, and her life changed.

“Football United made me very confident with my English and I just started opening my heart to everyone,” Habeb, 16, told AFP on the sidelines of a “gala day” in Sydney that brought together teams for a friendly contest.

“I met a lot of friends in Football United … now most of them are my best friends. I love communicating with people, especially young people like me.”

The former chairman of governing body Football Federation Australia, billionaire businessman Frank Lowy, was a Jewish refugee from Eastern Europe who arrived with one suitcase and no English in the early 1950s.

The late veteran broadcaster Les Murray, whose voice became synonymous with football in Australia, was born Laszlo Urge in Hungary in 1945 and arrived Down Under a decade later.

Both arrived in Sydney last year as Australia opened up 12,000 additional refugee places for people fleeing conflicts in Syria and Iraq.

It was Australian football’s strong bonds with refugees that caught the attention of the programme’s American founder Anne Bunde-Birouste.

Bunde-Birouste was living in Paris in 1998 when she was swept up by the euphoria surrounding the black-Arab-white make-up of the World Cup-winning French national team.

“The French won against all odds and because the team was multicultural. So it brought the whole country together,” Bunde-Birouste told AFP.

“Knowing that it was the world game, I just wanted to try and see what we could do in Australia to help refugee kids.”

Years later, the university lecturer set up the first Football United clinics in Australia, and thousands of youths have since passed through them.

Organised sport is expensive in Australia and with some of the refugees coming from large families, enrolling each child in a local club is costly.

They then get to develop their football abilities while also learning about Australian culture and life skills such as goal-setting and time management.

“Most of them have come from… broken families back in their home countries,” Hill told AFP.

“Given that Australia is a multicultural country, when they come here, it is something new to them. Back home, it was all one race. Providing our programme to them helps them integrate with other cultures.”

At the recent “gala day”, the youths were treated to an inspiring talk by Honey Thaljieh, a corporate communications manager for world governing body FIFA, who grew up in Palestine.

Thaljieh is strongly convinced of the power of football in boosting the lives of children who have endured conflict and hardship, having gone through a similar experience herself.

“It will change their lives eventually if they believe in it and they are determined, if they work hard,” Thaljieh, the co-founder and first-ever captain of the Palestinian women’s national football team, told AFP.

“Sports in general and specifically football is the best tool for young adults, for children, for boys and for girls because the game itself is about inclusion. It’s about bringing people together.”

For recent arrival Glaoo, Football United has given her the opportunity to showcase her silky skills on the pitch.

After a busy afternoon scoring goals for her school team, the teenager was dreaming of her next steps, including winning tournaments at higher levels. – AFP