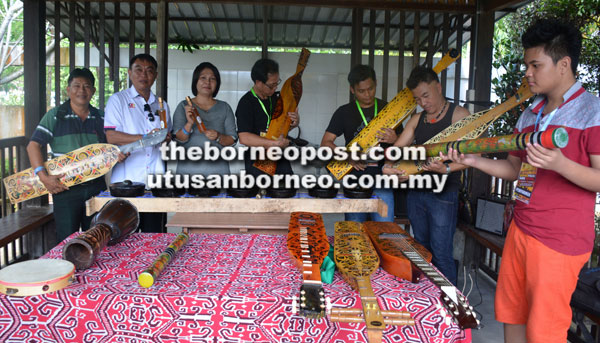 “There are many festivals, where sape is only part of the event but in Borneo Youth Sape Festival – it was all about sape. In fact, there was even a sape workshop and demonstration besides battle of sape (competition) among others.

“We hope Sibu folks would appreciate this as one of our tourism products,” he told reporters when met at 1Malaysia Cultural Village here where the festival was held.

Alexander also mentioned that Julien Cottet from France gave up his career to pursue sape.

“He fell in love with the traditional musical instrument and his love for sape was so great that he left his career to stay and even got married here.”

Sape player from Indonesia – Ferinandus Lah is a university lecturer and teaches sape and other traditional musical instruments, he added.

On their initial plan to smash the Malaysia Books of Record for gathering the most number of Sape players, Alexander lamented that it had to be scrapped due to funding constraint.

To organise the record breaking feat, he said, would require  RM18,000 upfront.

“In fact, we have a list of 250 sape players but funding constraint did not permit us to roll this out,” he bemoaned.

Nevertheless, he figured if there is support from the government or corporate bodies – they may hold the festival on a bigger scale next year.

On whether the festival would be made into an annual affair, he said this would very much depend on the support and demand from the people.

He explained that organising the event was no walk in the park and required a big budget.

“If this year’s festival is not a success, it would be difficult for us to hold it next year as we are a non-governmental organisation (NGO). We are not targeting profit but the cultural sape,” he pointed out.

Asked on the turnout, he was uncertain yet at press time as there may be last minute purchases, though sales of tickets has not been very encouraging.

“We hope that ticket sales would be able to cover our expenses in bringing in the performers,” he explained.

Adding on, he noted sape is well-liked by westerners including those in the United States but on the local front, response is lukewarm.

“Perhaps, this is due to lack of awareness and that is what we are trying to achieve through this event,” he said.

Adding on, he said the festival was organised in conjunction with Pebedas’ fifth anniversary and coincided with Visit Sibu Year 2017.

Alexander recalled he was often asked why the festival was named Borneo Youth Sape Festival instead of just Borneo Sape Festival, he said they organised it on youth level.

If it was named Borneo Sape Festival it would mean another level of bigger magnitude.

Asked to shade some background on the sape, he said personally he has only basic knowledge of the instrument. Alexander said it is soothing music from the orang ulu community.

Meanwhile, other activities rolled out included Battle of Sape, a competition divided into two categories- traditional and contemporary, with prize giving ceremony and a concert in the evening.