Wednesday, July 6
You are at:Home»World»Pope Francis wraps up Asia tour after meeting Rohingya 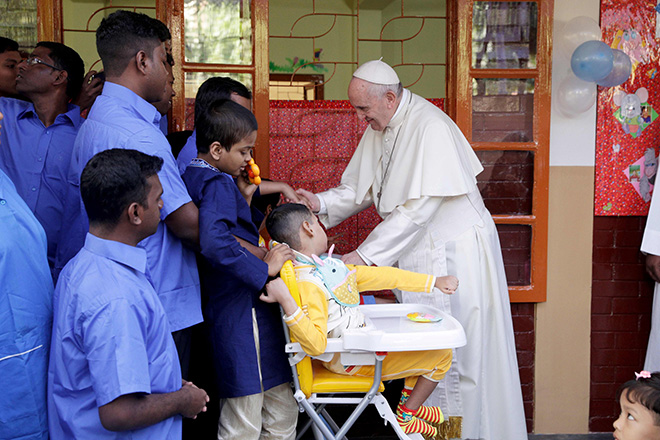 DHAKA: Pope Francis wrapped up a high-stakes Asia tour yesterday after meeting Rohingya refugees in Bangladesh in a highly symbolic gesture of solidarity with the Muslim minority fleeing violence in Myanmar.

The Catholic leader visited a hospital in Dhaka run by the order of Mother Theresa on the final day of a visit to Bangladesh and Myanmar that has been dominated by the plight of the Rohingya.

Pope Francis is known for championing the rights of refugees and has repeatedly expressed support for the long-suffering Rohingya, whom he has described as his ‘brothers and sisters’.

Myanmar – the first papal visit to the country – avoiding any direct reference to the Rohingya in public while appealing to Buddhist leaders to overcome ‘prejudice and hatred’.

In Bangladesh he addressed the issue head-on, meeting a group of Rohingya refugees from the squalid camps in southern Bangladesh in an emotional encounter in Dhaka.

fleeing across the border earlier this year.

“Your tragedy is very hard, very great, but it has a place in our hearts,” he told them.

“In the name of all those who have persecuted you, who have harmed you, in the face of the world’s indifference, I ask for your forgiveness.”

The pope referred to the refugees as Rohingya, using the term for the first time on the tour after the archbishop of Yangon advised him that doing so in Myanmar could inflame tensions and endanger Christians.

The word is politically sensitive in the mainly Buddhist country because many there do not consider the Rohingya a distinct ethnic group, regarding them instead as incomers from Bangladesh.

He had faced criticism from some rights activists and refugees for failing to address the issue publicly.

The pope did not visit the refugee camps, where only a handful were aware that one of the world’s most high-profile leaders was championing their cause just around 500 kilometres away.

One refugee expressed gratitude that the pope had finally uttered the word Rohingya, and said he believed the meeting would have a big impact.

“It is the first time that a great world leader has listened to us,” said 29-year-old Rohingya teacher Mohammad Zubair.

“This meeting will send a clear message to global leaders.” — AFP