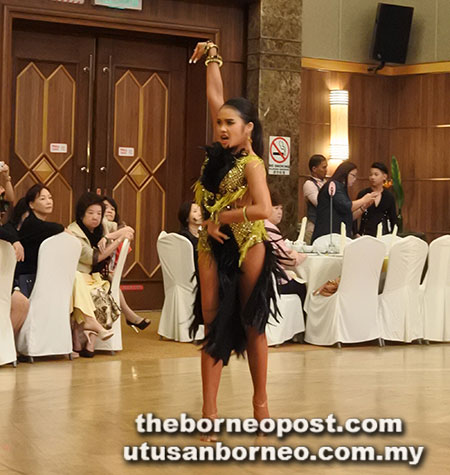 A competitor shows her prowess on the dance floor.

Assistant Minister of Tourism, Arts and Culture Datuk Lee Kim Shin who officiated at the event, hoped that organisers would come up with new and creative events to draw more tourists to the resort city.

“To be successful in the tourism sector, Miri needs varying types of events to attract more people to the city.

“Apart from the existing places of interests, signature events such as Borneo Jazz Festival, Miri International Deep Sea Fishing Tournament, Miri Country Music Festival and many others complement the efforts by the local authority to promote the city,” he said.

On the championship, he said the event has been gaining popularity since it was first held in 2012.

Endorsed by the Malaysian Ballroom Dancers Association (MBDA), he hoped this event can be organised in a bigger scale next year.

Some 200 dancers from Italy, Holland, Japan, Hong Kong, India, Singapore, Indonesia, Brunei, Philippines and Malaysia converged in the city for the championship this year.