Wednesday, January 22
You are at:Home»Business»Logistic players stand to gain from DTFZ 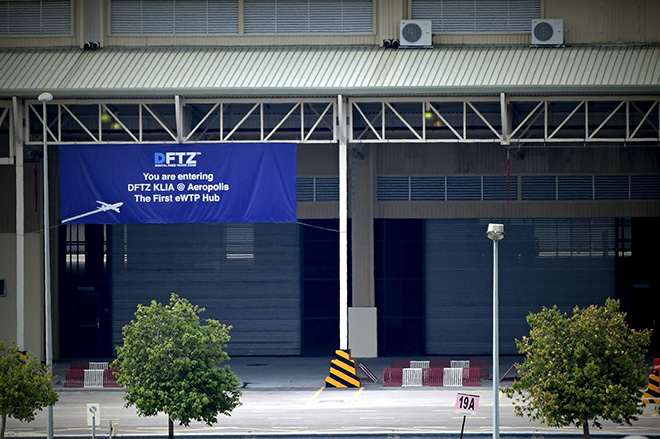 The bank highlighted Malaysia’s presence in the regional and global e-commerce market being on the cusp of an unprecedented quantum leap forward, driven by the DFTZ in KLIA Aeropolis. — Benama photo

The bank highlighted Malaysia’s presence in the regional and global e-commerce market being on the cusp of an unprecedented quantum leap forward, driven by the DFTZ in KLIA Aeropolis.

The DFTZ will serve as both a regional e-fulfilment centre and e-commerce logistics hub, it said.

While Malaysian Airports Holdings Bhd –  as the landowner and developer of KL Aeropolis –  is expected to be the main beneficiary of the project, AmInvestment Bank believed local logistics players are poised to garner a slice of action in the physical zone of the DFTZ.

In the tourism space, players are also expected to reap similar benefits due to sustained recovery in tourist arrivals in 2018 which was estimated to hit 28 million in 2018 by Prime Minister Datuk Seri Najib Tun Razak during his Budget 2018 speech.

“The number should continue to grow, leading up to Visit Malaysia Year in 2020, when Malaysia is also slated to host a series of high-profile international events including the Commonwealth Heads of Government Meeting (CHOGM), the APEC Summit and World Congress of Information Technology (WCIT),” added the bank.

On the other hand, AmInvestment Bank remained cautious on local seaport operators as they are not expected to be able to completely shrug off the negative impacts of the recent reorganisation of the global shipping alliance in 2018.

In a sector report, the research arm shared that the reorganisation of the alliance and its resulting diversion of transhipment cargo volumes to Singapore would affect most seaport operations, particularly transhipment ports like Westports Holdings Bhd.

The lower volumes would be offset somewhat by growing cargo volumes in 2018 thanks to Malaysia’s robust exports and imports, it added.

Bintulu Port Holdings Bhd will however continue to be weighed down by start-up costs from its newly completed Samalaju industrial Port.

While AmInvestment Bank expects players in the tourism and e-commerce space to perform well in 2018, they still maintain a ‘neutral’ stance on the transportation sector in light of the uncertainty of seaport operator performances.

“However, we may upgrade our stance to overweight if tariffs such as airport taxes, postage rates and port tariffs are adjusted upwards; volume performance such as passenger traffic, cargo throughput and letter mail, parcel volumes beat expectations; yields surprise in the upside on reduce competition; and fuel cost comes in lower on weaker crude oil prices,” said the bank.