Wednesday, January 22
You are at:Home»News»Nation»Thousands stage peaceful protest against US decision on Jerusalem 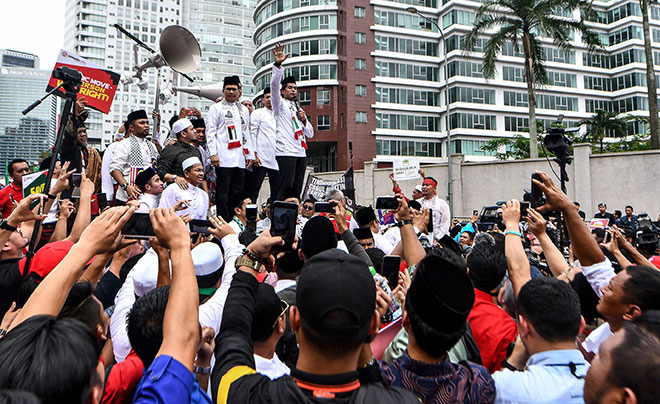 Khairy speaking during the peaceful demonstration in front of the United States embassy. — Bernama photo

KUALA LUMPUR: Thousands of Muslims yesterday staged a peaceful demonstration in front of the United States embassy here, protesting against US President Donald Trump’s announced recognition of Jerusalem as the capital of Israel.

The demonstrators, comprising members of Umno Youth and PAS and representatives of several NGOs, expressed their solidarity with the people of Palestine in the protest that began at about 2 pm after the Friday prayers and went on for about an hour.

Umno Youth chief and Youth and Sports Minister Khairy Jamaluddin addressed the demonstrators after he had handed over a memorandum of protest on behalf of Umno Youth to a representative of the US embassy.

He said Muslims in Malaysia would not remain silent but would rise to defend the rights of the people of Palestine who were oppressed by world powers such as the United States.

The recognition of Jerusalem as the capital of Israel was highly contrary to international laws and humanitarian rights, particularly in relation to the people of Palestine, he said.

“This is an outrageous act which Muslims around the world cannot accept. We will not stop until you hand over the Palestinian land to its people,” he said.

Meanwhile, Dang Wangi District Police chief ACP Shaharuddin Abdullah said the police arrested two men who broke through the police cordon in their attempt to hand over a memorandum of protest to the US embassy.

In BUTTERWORTH, over 200 people representing 18 NGOs as well as Umno and PAS staged a protest after the Friday prayers at the Seberang Jaya Mosque.

A representative of the demonstrators, Bukhori Ghazali, said making Jerusalem the capital of Israel stoked the sensitivities of Muslims around the world as it was a large city for the Palestinians who had fought tooth and nail for 50 years to keep it from being seized by the Jews.

He also urged the Malaysian government to expel the US ambassador to Malaysia to show that Malaysians were serious in their opposition to the US decision on Jerusalem.

Bukhori also called on mosques to hold special ‘hajat’ prayers and organise sermons on the boycott of US goods. — Bernama