Saturday, May 30
You are at:Home»Features»A Kenyah legacy – Naming Ceremony in Miri 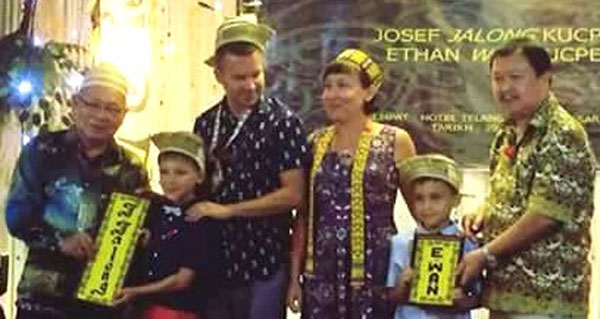 The children with their parents after the Naming Ceremony.

A KENYAH naming ceremony or Ti Adet Ngaran Kenyah took place recently in Miri — probably the first by a Kenyah family outside of the enclave of Long San in the Baram.

Relatives and friends all over Sarawak and from other parts of the country and as far as the United Kingdom, gathered to celebrate the auspicious occasion at a hotel in the Resort City.

The naming ceremony was organised by Cecelia Selalang Lian for her grandsons, Joseph and Ethan Kucper, now living in London.

She said she was  happy to do it for them to carry on the legacy of her people.

A beaming elderly man told thesundaypost that to the Kenyahs, child naming or pusau anak is an important social occasion.

The old timer was wearing batik shirt and smart trousers and his Kenyah hat was adorned with feathers, symbolising his status. The more the feathers, the higher the status. In fact most of the guests of Kenyah descent, wore their tribal hats.

“These young children have come back to our motherland to be given Kenyah names. We are very happy we can hold the ceremony in Miri. They will be given names selected from the ancestors’. This ceremony is, therefore, very significant for them and their relatives. We are here to share the joy,” he explained.

The master of ceremony and one of the chief organisers was Jeffrey Ngau Lenjau, a Kenyah Lebo Vo, now a PhD candidate from Universiti Sabah.

For a young Kenyah like him, Ti Adet Ngaran Kenyah is a very significant event.

He translated the Kenyah language for guests and also helped explain some of the stages of the elaborate ceremony, not witnessed by most people in their life time.

In the past, a naming ceremony was only held once in 30 or 40 years due to various constraints — time, financial, social and even political.

A Kenyah friend remarked: “It is not an event to be missed. If I am not present for this occasion, I don’t know whether I will ever have another chance to attend one.

The ceremony was an eye opener for first-time guests.

One of them told thesundasypost: “The fact that it’s held in Miri makes it very convenient for relatives and friends who cannot travel to the interior of the Baram. I’m glad I can witness the ceremony in Miri as I will not be able to go to Long San so far away. I work in Miri. Nowadays it’s not easy to get leave.”

A church member was happy to note that the ceremony fused traditional and Christian rites.

“The prayers are said in Kenyah and throughout the ceremony, Kenyah traditional music is played together with Christian hymns. Today, all of us feel spiritually strong when we sing our hymns in Kenyah,” he said.

Another guest added: “This hotel — the Telang Usan — is most suitable as it reflects the cultural ambiance of the Kenyahs of Long San. With many family members present here today, I feel as if I’m in a Long San longhouse with all my friends and relatives.

“I feel good too because many have come in our traditional costumes. The music is superb and the walls of the hall are decorated with many Kenyah paintings. If this ceremony is held outside Long San or Miri, the cultural atmosphere will not be the same. This place definitely exudes a traditional feel.”

The declaration of the Kenyah Names was made by Datuk Stephen Timothy Wan Ullok. The names were selected to preserve clan names according to Kenyah cultural practice.

An interesting part of the ceremony was the Patu Bon, a cheerful ritual where pig fat and ginger juice were served.

Two young men carried the two items in a wooden boat and were warmly welcomed by all in the hall. Distribution of the traditional servings was done by a team of young men.

An elderly woman observed: “A lot of gingers are used to obtain the juice. To the longhouse folks, the ginger juice or water in pusau anak symbolises the end of a period of hardship and suffering. The hot ginger juice is believed to prevent evil spirits from disturbing the children and the community as a whole. Those who drink the ginger juice will be blessed with a peaceful and prosperous life.”

According to a relative of the family, the Kenyahs are ‘a very stratified’ society. Today, the guests are served by four people. A child of higher status would have required eight people.

Interestingly, as the relative explained, it has not been easy organising a naming ceremony due to the strict regulations of Kenyah society. For any naming ceremony to take place, both parents and all their children must be still living and the candidates must be of good behaviour and manners.

After the guests were served, there was a cake cutting ceremony, followed by the lowering of the model of a house containing Kenyah tobacco. When the ‘Tobacco House’ was lowered, the two named children distributed the tobacco to all the guests.

Their proud grandmother enthused: “They are very professional in the distribution.”

It was only after this that the guests were feted to dinner — plus a traditional concert with renditions from Mutang Imang, a Kayan sape player, Ame Pade Junior (Datun Julut), Joshua Lenjau (Kenyah sape player) and Viviana Selalang Racha Jap (solo female dancer).

The evening concluded with a prayer by Wilbert Wan Usak.

Both participants and guests alike lauded the organisers for preserving a Kenyah tradition and the family members for fostering cultural integration and fusion to prevent “cultural erosion.”

To some of the guests, the Naming Ceremony in Miri was also to help revive Kenyah culture.

Long San. Some older citizens have seen it only once — like some 40 years ago.

It hasn’t been easy for families to invite so many guests to the ceremony.

A relative said: “Traditionally, all food, drinks, accommodation and even transportation must be borne by the host. Moreover, rice wine, other drinks, and food must be free flowing till the early hours of the morning. So it’s definitely not an easy occasion to organise.”

Hopefully, this meaningful ceremony of the Kenyah will be preserved as a legacy. Some changes will have to be made to the social dynamics of the community as already, there are inter-marriages with non-Kenyahs, and marriages between the aristocratic and commoner groups.

The Kenyahs have learnt a great deal from the Naming Ceremony in Miri and will gradually learn to embrace all that is traditional — within acceptable transformation boundaries.

Most significantly, the Kenyahs and guests from other racial backgrounds will long remember this cultural event hosted in Miri by Cecilia Selalang Lian, the gracious hostess, and grandmother of the two children — Joseph and Ethan Kucper — named at Ti Adet Ngaran Kenyah. 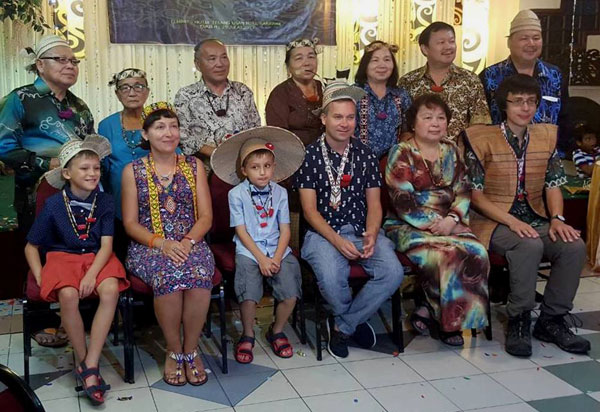 Grandmother, parents and grandchildren after the event.

Previous ArticleGeometric patterns in nature
Next Article A cradle of hope