Saturday, August 15
You are at:Home»Features»Motorbiking round the world 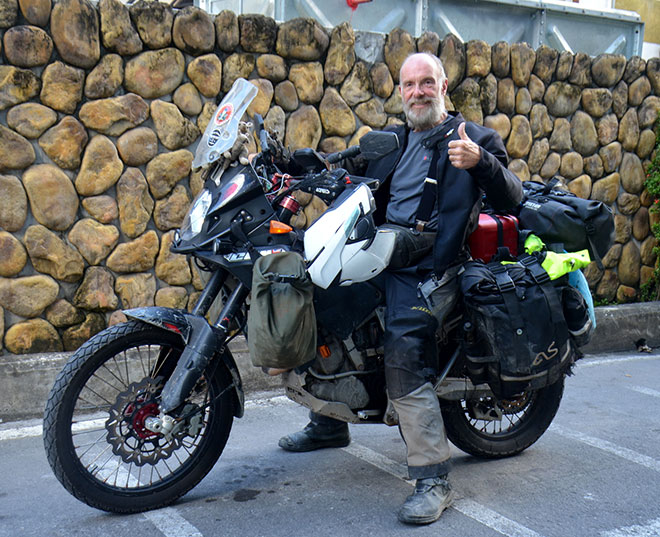 Geoff Keys on his bike in Miri.

THE world is a book and those who do not travel read only one page.

An inspirational quote by a Fourth Century philosopher St Augustine of Hippo — with the message that travelling can be one of the most life-changing experiences.

This holds true for world traveller Geoff Keys who said the greatest thing about travelling is one might discover new things one didn’t realise exist before.

“Travelling allows us to see how the world is outside our hometown or even continent. A great learning experience, travelling allows us to become more appreciative of the things we have in our own place and teaches us never to look down on people but understand that lives are different for each of us in this world — and tougher for some,” he told thesundaypost.

Driven by a passion for biking and travelling, the 65-year-old Londoner started his globe-trotting on two wheels in 2014.

Throughout his three years of travelling up to now, he has passed through various countries and continents, including Russia, Kazakhstan, Kyrgyzstan, Mongolia, Japan, New Zealand, Australia, Timor-Leste, Indonesia and the island of Borneo (some parts of Brunei Darussalam, Malaysia and Indonesia).

“I have decided to do this journey after being inspired by several people who have written books about their own journeys,” Keys revealed.

The first was German-born British journalist Ted Simon, author of Jupiter’s Travels, narrating his four-year 126,000km journey across 45 countries on a Triumph Tiger 100 500cc motorcycle from 1973 to 1977.

Simon’s book was first published in English in 1979.

“I also had a friend who rode from England to Australia back in the 90’s and the stories he was telling me made me feel I wanted to do something similar,” Keys said.

Although he decided to do the journey in 2008, he had to put it off as his children were still young. So he waited until 2014 when they were all grown up before setting off.

“The journey started pretty much spontaneously for me. I just made up my mind to travel the world and with a six-year gap to decide whether to go and actually leave, I have used that time to make plans and bought a bike.

“The reason I’m doing this is that I can and I want to see the world on my motorcycle,” he said.

Keys added that he has been riding a motorbike since 16 and is no longer a stranger to travelling on one. He just has to decide when he wants to go — and takes off.

“Motorbiking is the best way for me to travel,” he said.

According to Keys, if you choose to travel on foot or backpacking, then you have to go where the plane, train or bus takes you.

On the other hand, you can have more freedom travelling in a car or camper van but the problem is big vehicles can be very expensive to put on board a ship, going from one continent to another, and moreover, you cannot really engage with the outside world.

The other choice might have been a bicycle but that would be very slow.

“So motorcycle is the best compromise. I can go where I feel like going and can stop or stay a while at a place and leave when I want. It also allows me to get closer to the locals. Therefore, for me motorcycling is definitely the best way to travel,” he said. 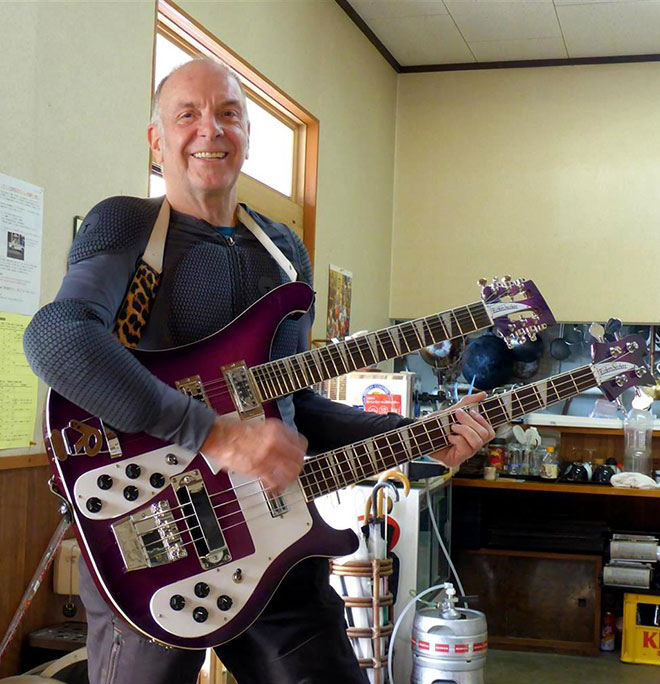 Playing a guitar in Japan.

A misconception Keys wishes to clear up is that if you want to travel by motorbike, you have to use a machine with very high CCs.

“Some people seem to think if you’re going to travel on a motorcycle, you need a big bike or something like that but that’s not true.

“You can go for 250CC – you just have to go a little slower,” said Keys currently using a Clews Competition Machines (CCM) GP 450 Adventure Bike.

He regards his age as his distinctive quality compared to other bikers who also travel around the world on two wheels.

“I’m a retiree. All my children are grown up, so I can be out and away from home for a long period. I can travel for as long as I’m able to. I’m also fit enough to do so. I have no job to return to as there is no need for me to earn a living anymore.”

He said the thing with younger people was they usually had a deadline and needed to return home and start earning money again because they had spent all their savings while travelling.

But for Keys, he regularly receives income from his pension, allowing him to “keep travelling and travelling.”

He said his income is his pension. He also has a house which he rents out in London — so he gets rental income as well.

He added that although he couldn’t afford to be extravagant, he is able to carry on “day to day with no problem.”

Among the major challenges Keys has faced in his journey is bureaucracy.

“I need a Customs Department document — the Carnet de Passages en Douane (CPD) — for me to take my motorcycle into several countries around the world. This document has to be renewed every year.

“Of course, every foreign country demands a visa which can be very expensive with certain time restrictions. Certainly for me, bureaucracy is the biggest hassle.”

According to Keys, there are many advantages of travelling on a bike, including the opportunity to get closer to the loc al community.

“It also allows the local community to see me although in a bit unusual way. It makes them curious and interested to know why, in my 60’s, I’m still travelling around the world on a motorbike. Everybody is very welcoming and friendly. They usually come and talk to me.”

From his travels, Keys has come to realise people are the same all over the world — they want to have as good a life it can be, bring up their families and work to earn a living.

“So that’s a big lesson you can learn when you leave your own country and continent and go somewhere you have never been before.

“Leave all your prejudices behind and learn that people are keen and interested to meet strangers and foreigners and want to talk to them. This is the delight and pleasure of going to new places,” he explained.

Keys said he was keen to visit Sarawak as the island of Borneo is famous for its nature, wildlife and tropical rainforests.

“I crossed over to Sarawak from Kalimantan where I got to see Orang Utans and visited the forests. I wanted to visit the entire island — that was why I came to Sarawak. I also visited Brunei.

“In Sarawak, I got to see the wildlife as well, especially Orang Utans.

I visited Bako National Park to see the monkeys and the walking trails. I have been to the Niah Caves which is absolutely an amazing place, quite incredible,” he said, adding that most of the time, he would surf the Internet for places to visit and stay.

He noted one interesting feature about Sarawak is the calmer traffic condition, less crowded with vehicles and traffic jams – with the exception of the urban centres.

He said how long he stayed in any one place would depend on how much was there to see.

“I might plan to stay in one place for two or three nights, then I might find there’s actually more to see than I thought. So I might stay another couple of nights. I don’t usually have to be in any place at any particular time.

“I can be flexible. If I discover a nice place, I might end up in a nice hostel where I can rest for couple of days and write in my blogs and chill out before I move on again.”

Keys goes back to London to be with his family — usually once a year.

He leaves his bike in a particular country and goes home while the machine is being shipped from one country to another.

He said this would prevent him from getting homesick so that he could keep travelling.

“When I’m done riding through Asia, I want to travel around Africa and South and North America. Altogether, it would take me about six or seven years. No doubt, it’s a long time but I take a break every year and be back in the UK. It helps me to recharge before travelling again.”

All in all, Keys expects his wanderlust will take him to over 100 countries. Brunei is his 23rd country since starting his journey three years ago (2014).

“This may not sound like a lot of countries because I actually spent nearly two years in Australia. So I guess it’s a fair number. By the time I get back home, I would have visited over 100 countries quite easily, I would reckon,” he said.

For him, the best motivation to keep going is “I love riding my bike and seeing new places. I love meeting new people.”

The other motivation is that travelling on the road itself is a pleasure — just leaving one place behind and moving to the next is a great thing to do. 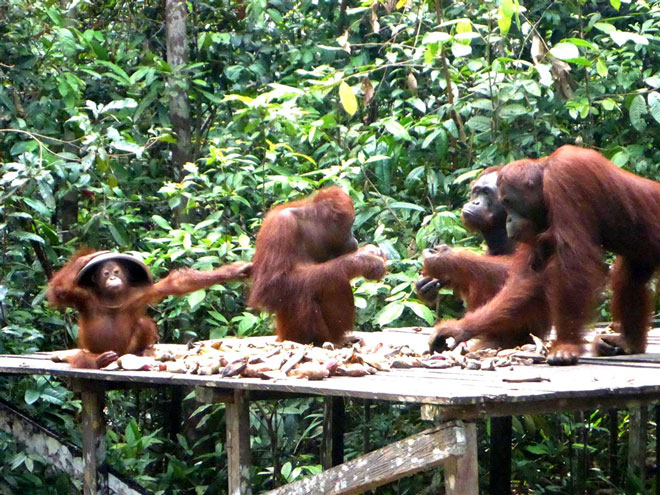 One of the reasons why people visit Borneo, according to Keys.

Keys had some unpleasant experiences during his travels.

“I fell off my bike and broke a bone. I did that twice in Australia. I broke a collarbone and some bones in my hands and rested up for two months each time to let those bones heal. That was not good fun.

“Apart from that, it was the weather. Riding in the rain wasn’t much fun. Sometimes, I also got bit depressed and took time to rest up for a couple of days somewhere — but that was all,” he recalled.

After Brunei, Sarawak and Kalimantan, Keys plans to travel to Java and Sumatra before heading to Kuala Lumpur to visit his friends for Christmas.

“I would probably explore more around Malaysia before Thailand and the rest of the Southeast Asia, including Laos, Cambodia and Vietnam,” he said.

To aspiring world travellers, Keys said ‘Just go for it’.

“Try and plan where you want to go and how you want to travel. Don’t be afraid of the world outside of the places you know because it’s terrific to know people welcome you with hospitality and won’t threaten you.

“Obviously, you have to be careful with going out late at night — which also applies to your home city but don’t be afraid of the world out there. Make some plans and just do it.

“Just go and learn, then travel around and enjoy it but don’t hold back, the world is a great place,” he enthused.

Those who would like to get to know more of Keys and his exciting journey around the world, can visit https://motopangaea.com.