Tuesday, May 18
You are at:Home»News»Sarawak»‘Haunting, yet healing’ sape music brings Hikaru to the Dayak heartland 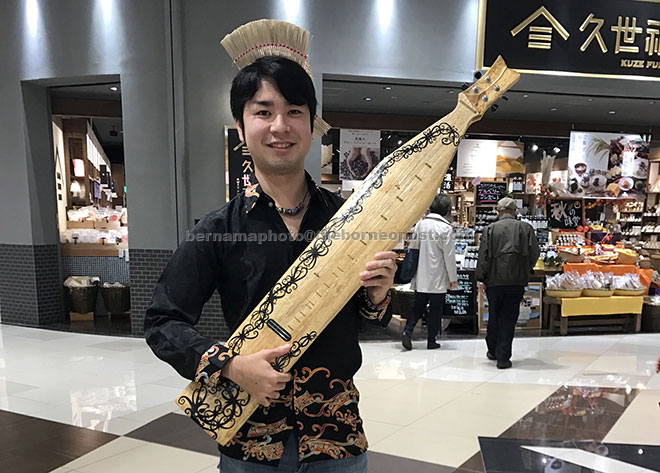 Hikaru with his treasured sape after a performance in a shopping mall in Tokyo, Japan. — Bernama photo

TOKYO: Hikaru Yokoyama was all concentration when playing the Kenyah’s song ‘Leleng’ with his beloved sape amidst a crowd of busy shoppers at AEON Makuhari Shintosin Mall, here recently.

Donning a black long-sleeved shirt with the distinctive Orang Ulu motif and the ‘lavung tepo’ (Orang Ulu hat), the  22-year-old Tokyo native and his tribal music stood out, and he smiled briefly in acknowledgement to his audience, who were equally as mesmerised by the Bornean sounds as he was.

Although he had only learnt to play the lute for less than a year, Hikaru’s interest in sape began more than two years ago when he discovered the music by chance while browsing through YouTube.

“I was totally captivated when I heard the music for the first time. The melody was haunting, yet it was so healing. I have never heard something like that before,” the undergraduate of Malaysian Studies from Tokyo University of Foreign Studies told Bernama when met here, recently.

That moment sparked Hikaru’s interests to discover and learn more about sape from the Internet and books and, in his pursuits, he got to know several sape players including renowned Sarawakian Jerry Kamit and Frenchman Julien Cottet.

As his tremendous interest in sape deepened, he was also getting more motivated to visit Sarawak to pursue his passion first-hand from the locals. He said that the opportunity came when he applied and was accepted to undergo an internship programme with a Japanese tourism company at its branch office in Kuching.

“I arrived in Kuching in February this year and the trip there was truly an eye opener for me. I was exposed to the wonderful cultures of the people there. And the best part, I was finally able to meet my idols in person. It was a dream came true for me,” he said.

Hikaru was later put under Cottet’s tutelage, where he spent his six months in Sarawak mastering the skills from Cottet and other sape players.

“It was a priceless moment in Sarawak. Cottet had also helped to get me my first sape. It cost RM700,” he added.

Upon returning to Tokyo, Hikaru began to introduce the lute to his friends and even played it at gigs in solo performances or with his band.

Apart from practising traditional Orang Ulu and Iban songs that he had learnt in Sarawak, he has even tried to strum Japanese songs as well as modern pop songs with the lute.

“I wanted to create more fusion music and introduce this beautiful lute to a wider audience and the larger Japanese public,” he said.

Hikaru said he plans to return to Sarawak upon completion of  his studies in 2019.

“Even right now, I have started to search for Japanese companies that have a branch office there or even  starting my career there myself. I am definitely going back,” he said, smiling with optimism. — Bernama

Previous ArticleGovt allocates 5.8-acre land along Miri By-Pass road for Christian Ecumenical Centre
Next Article Climate victims seek justice, on the street and in the courtroom