Thursday, February 2
You are at:Home»News»Sarawak»Move by former politician to field his son in Julau revealed
For the freshest news, join The Borneo Post's Telegram Channel and The Borneo Post on Newswav. 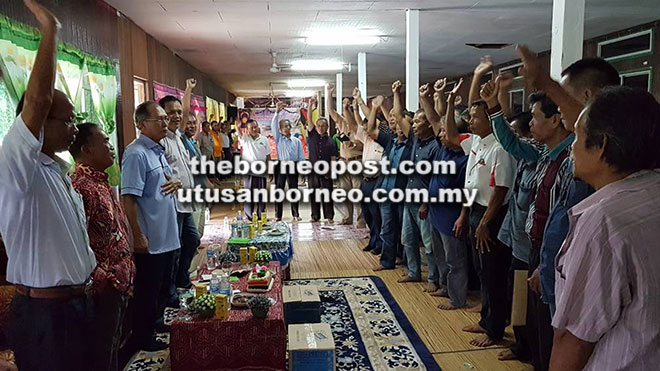 Salang (third left) acknowledges the show of support from the longhouse chiefs at the function.

SIBU: A certain former politician in Pakan is now attempting to get his son, also a former state politician, to contest as the BN candidate for Julau parliamentary seat in the coming 14th general election.

He has allegedly met some longhouse chiefs to sign a petition endorsing his son as the candidate to replace the incumbent Datuk Joseph Salang Gandum.

This development was revealed at a meet-the-people session/pre-Christmas gathering at Rh. Nuri Lura in Babai near Pakan on Saturday.

Salang was the guest of honour at the function which was also attended by about 30 other longhouse chiefs.

A longhouse chief John Okin, who is also a leader of Progressive Democratic Party (PDP), who made the revelation added the politician claimed he would present the petition after he had obtained enough signatures to the deputy prime minister to show that his son had solid grassroots support.

Okin described this as a very sad episode in local politics.

“It is beyond my comprehension that this politician believes he can just dismiss Masing’s decision especially when the seat belongs to PRS,” Okin said.

Salang is PRS secretary-general besides being the chairman of 1Malaysia Sarawak Advisory Council.

Okin cautioned that the politician could next prey on gullible longhouse chiefs from the Pakan area.

“I hope they will be very wary of this deceit and chicanery,” he said, while alleging that some local leaders and civil servants were in cahoots with the politician in manipulating the chiefs.

“I also fear their unscrupulous action will cause their longhouse to break up when their followers are against their one-person decision.

“We have these chiefs who are willing to sell their integrity and honour for mere pittance despite knowing the implications of their action,” he said.

Recalling the past, Jantan said this politician too had insulted the Iban community when he had infamously said that their support could be obtained at a price cheaper than buying the belacan (prawn paste).

He added if indeed there were top BN leaders who had been influenced or duped into believing Salang was no longer a winnable candidate, they should hold an open dialogue with all leaders of local BN component parties to find out the truth for themselves.

Earlier in his speech, the chairman of Parti Pesaka Bumiputera Bersatu (PBB) Pakan division Cr Jimbun Radin said rumours that Salang would not defend the seat for BN in the coming election were nothing more than lies and fabrication.

“As far as PRS is concerned he has been confirmed twice by Masing to defend the seat.

“The decision still stands. Let us hope it will stay that way as we are all ready to give him our fullest support,” he proclaimed.

He said Salang was a very senior politician and had represented Julau for four very successful terms.

“More importantly, both Meluan and Pakan have been included in the Sadok Agropolitan area (which also includes the Meradong, Sarikei, Saratok and Betong districts) which is a very major development project in the state’s food production plans.

“If we dream of being part and parcel of this development, we certainly need Salang’s continuing guidance and leadership,” he said.

Later, the about 30 chiefs pledged their full support to Salang to lead them for his fifth term.