Thursday, February 2
You are at:Home»News»Sarawak»Success spurs MRC Miri to continue with voluntary blood donation campaigns
For the freshest news, join The Borneo Post's Telegram Channel and The Borneo Post on Newswav. 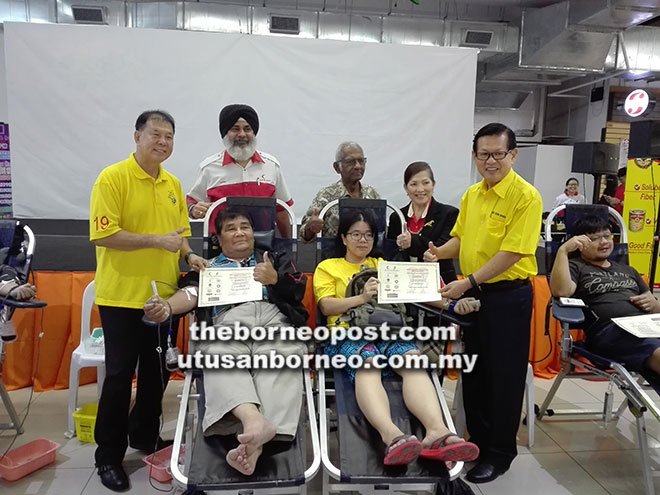 Lee (standing, right) and Ting (left) present certificates of appreciation to the blood donors, as Karambir (standing, second left) and several members of the organising committee look on.

Lee pointed out that in the early days, it was tough to conduct blood donation drives as parents, particularly among the Chinese, would discourage their children from donating blood – believing that the practice was harmful to the donors’ health.

However after having consistently running the campaign over the years, MRC Miri managed to overcome the problem in 1989 when many people began to come forward voluntarily to support this good cause.

“The district has been actively involved in blood donation campaigns for more than 50 years. I’m happy to see our successful blood donation drives, in particularly new donors among the youths, compared with those seen in the olden days, when people had to buy blood as there were not enough donors.

“The support from MRC Miri, non-governmental organisations (NGO), associations and others helps to ensure sufficient supply in the blood bank.”

Lee also expressed his thanks, on behalf of MRC Miri, to all blood donors.

“The Miri community has been very supportive in public blood donation campaigns. Our mobile team will continue to ensure the implementation of such drives at shopping complexes.”

“Out of this number, 109 were successful including 22 new donors.”