Wednesday, July 28
You are at:Home»News»Sarawak»Local young digital entrepreneur in Top 3 of 1MET start-ups 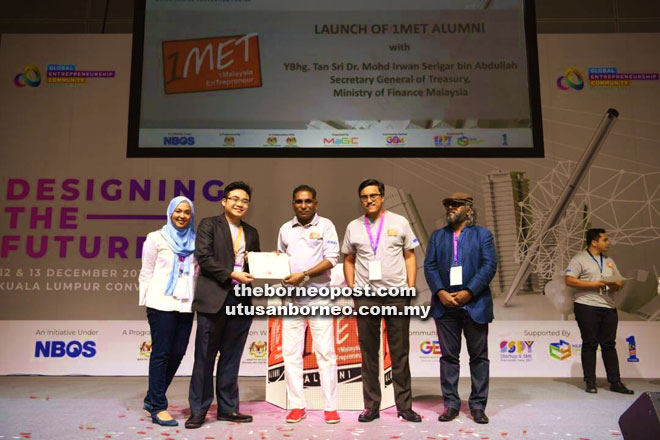 Hisham, who is the proprietor of BeliBeli24 from Sibu, made Sarawak proud with his achievement in the programme which involved about 500 business start-ups under 1MET.

The award allows Sarawakian start-ups to join other upcoming entrepreneurs to go to the 1MET Plugged-in Jakarta 2018 to be held on Jan 23-25 next year, which will bring together influential ecosystem players from around the region.

The other two of the Top 3 are from Peninsular Malaysia.

Met here upon his return, Hisham told reporters that the selection for the Top 3 was made based on performance and ideas for the start-ups.

Participants had come from around the world including nations like Japan and China.

The 1MET programme, which is part of the Malaysian government’s New Blue Ocean Strategy (NBOS), aims to create future entrepreneurs for the fast-changing globalised market.

Meanwhile, Hisham said his BeliBeli24 is an online platform which offers economical solution for businesses to go online.

“The BeliBeli24 allows businesses to have their own booking system or access the BeliBeli24 on-demand delivery fleet. Mankind has experienced three industrial revolutions, firstly the 1765 rise of steam and railroads, secondly the 1870 rise of electricity and oil, and thirdly the 1969 rise of electronics and automation,” Hisham pointed out.

He said the fourth revolution – a shift towards digital economy – is happening now.

“The Cloud, Big Data Analytics and the Industrial Internet of Things will definitely propel us to the next level.

“I am glad to see the federal government’s NBOS initiatives and the state government’s focus on digital economy, as well as to see fellow Sarawakians adopting Industry 4.0.

“If we are not online today, we are invisible tomorrow,” he cautioned.

Meanwhile, conversations at the GECommunity Summit 2017 were said to have orbited around the current and emerging needs of developing and developed communities so that ideas were designed through intentional action and participation by the community.