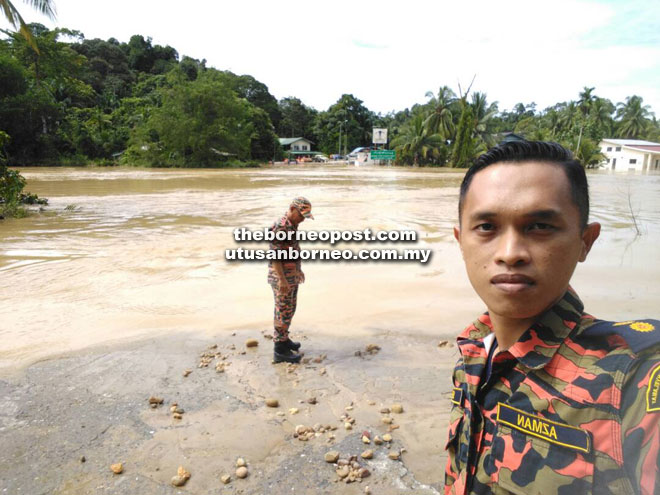 Azman (right) and a colleague check on the water level in Sungai Pandaruan area.

LIMBANG: Fire and Rescue Department (Bomba) Limbang and Lawas continued monitoring the flood situation in several areas in the two districts yesterday in view of the prevailing inclement weather.

“The flood water in all the rivers is receding except at Sungai Pandaruan where the water level remains the same,” he said.

However, the water level is rising in areas of ​​Kampung Medait and Batu Danau as flood water in the upper reaches of Limbang had gone downstream.

“Residents in the affected areas are advised to evacuate to higher ground should the need arise,” he said.

In Lawas, some 32 children and four babies were among 68 residents around Trusan area moved to the Evacuation Centre at Trusan Community Hall, which entered the second day yesterday.

“Even though the flood water is receding, we advise flood victims evacuated not to return home yet as the rainy weather persists.

“Based on the weather forecasts, there is likely to be high tide tonight. Thus they should stay put at the evacuation centre until the weather improves,” he said.

As for Sundar area, the water level is generally receding although in some areas rising, but no one has been evacuated so far.