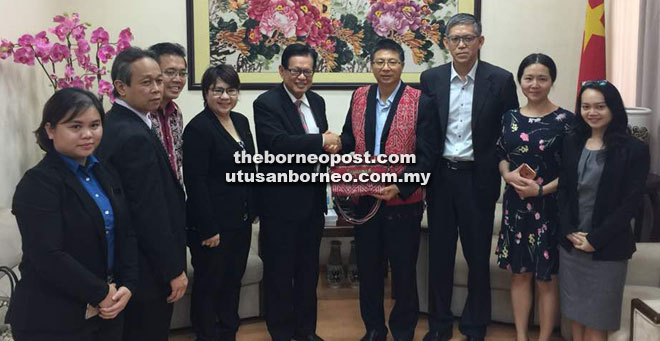 Lee (fifth left) presents a gift to Fu who will be leaving Sarawak.

KUCHING: The outgoing Consul General of the People’s Republic of China in Kuching Fu Jijun has been commended for promoting Sarawak’s tourism industry.

Assistant Minister of Tourism, Arts and Culture Datuk Lee Kim Shin said Fu’s influence over China’s civil aviation authorities has made it possible for Sarawak to have a daily flight route from Kuching to Shenzhen starting Dec 27 via Air Asia.

“So far, the response is very positive,” said Lee when met during a courtesy visit to Fu at the Chinese consulate here yesterday.

The visit is to convey the ministry’s gratitude to Fu who will be transferred out of the Kuching consulate after serving here for two years.

Lee noted that Sarawak which is in the midst of transforming to digital economy would benefit from the direct flight to and from Shenzhen, China.

“There are now many online businesses which rely on air cargo from China to bring in their goods to Sarawak,” said Lee.

airlines to fly directly to Sarawak as well as creating their bases here for long term benefit.

Meanwhile, Lee received a courtesy call from the Consul General of Malaysia in Nanning, China Bong Yik Jui at his office in Masja yesterday.

The visit was to discuss collaboration between the Ministry of Tourism, Arts and Culture and the consulate in Nanning.