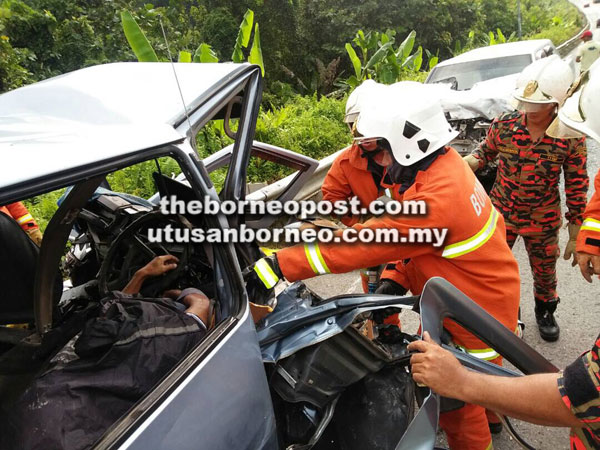 Bomba personnel seen trying to extricate one of the bodies.

SERIAN: Three persons perished while five were injured after a 4WD vehicle crashed into a van at Parun Binong, a hill along Serian-Tebedu Road yesterday morning.

It was learnt the six passengers in the van were family members returning from Miri to one of the villages here for the Christmas holiday.

Serian police district chief DSP Aswandy Anis said that initial investigation showed that the accident occurred at about 7.15am after the 4WD vehicle on its way uphill collided head-on with the van.

He said the driver of the 4WD vehicle who was travelling alone towards Tebedu, failed to avoid the van which was coming from the opposite direction while overtaking.

“The case is now investigated under Section 41(1) of the Road Transport Act 1987,” said Aswandy.

Two other passengers in the van, Noreni Idi, 44, and Davevians, 14, also from Miri were reported to be seriously injured. Also seriously injured was the 28-year old driver of the 4WD from Kampung Sejijak Plaman.

Aswandy said all the injured were being treated at the Serian Hospital and will be referred to Sarawak General Hospital in Kuching for further treatment.

Led by Senior Fire Officer II Rusman Saring, the first Bomba vehicle arrived at the scene at 7.40am and the team spent almost two hours to extricate the victims trapped in the wreckage as well as providing first-aid to the injured victims.

The accident caused a bad traffic jam at Parun Binong, which is midway towards the town of Tebedu before the Indonesian border.

The injured victims received further treatment at Serian Hospital, while the seriously injured female passenger was being transferred to the Sarawak General Hospital in Kuching at press time. 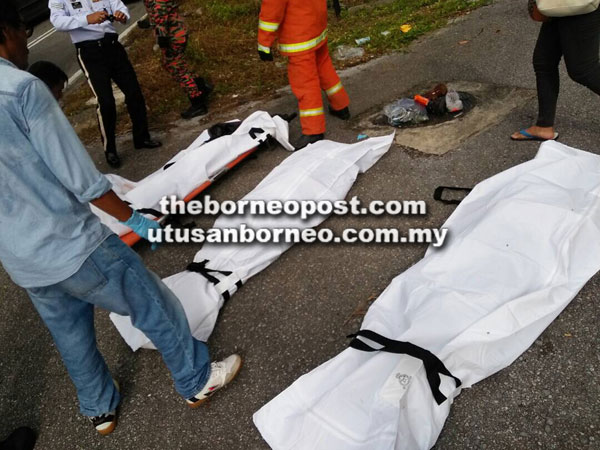 The three bodies after being extricated from the wrecked van.