Wednesday, December 7
You are at:Home»News»Sarawak»Sim calls on ex-members of SUPP to return to fold 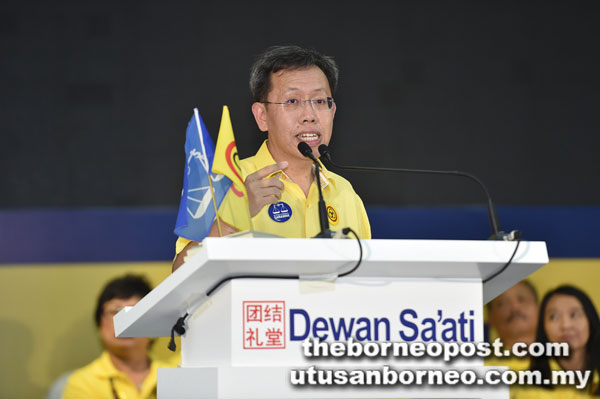 Dr Sim deliver his remarks at the event.

KUCHING: Sarawak United People’s Party (SUPP) is calling upon all former members and supporters to return to its fold.

Its president Datuk Dr Sim Kui Hian welcomes everyone who left SUPP before, to come back and help the party regain its strength for the next parliamentary election towards a stronger Sarawak.

According to him, SUPP is ready for the next election – to fight and counter all the allegations made by the opposition against the Barisan Nasional (BN), as well as to win back all the seats it lost in 2013.

“We will do all we can to win big for BN and for Sarawak.

“But all I can say is I will stand and I’m prepared, even if the elections were to be held tomorrow,” he said at SUPP’s triennial delegates conference (TDC) here yesterday.

SUPP contested in seven parliamentary constituencies in 2013 but lost six and won only one – Serian, through Datuk Seri Richard Riot. Aside from Serian, the other seats traditionally allocated to SUPP are Kuching, Sibu, Stampin, Miri, Sarikei and Lanang.

SUPP was established in 1959 mainly by leftists and working-class Chinese. However, its influence among the Chinese began to wane in 1997.

This decline was partly attributed to the unwillingness of the ageing leaders to give way to the young blood to take over key posts in the party.

Some of these old leaders were already in their late 60s or 70s and had been members of the powerful central working committee for years, depriving the young and progressive talents to take over and introduce changes.