Friday, July 1
You are at:Home»News»Nation»Kepayang fruit’s intoxicating nature not a myth 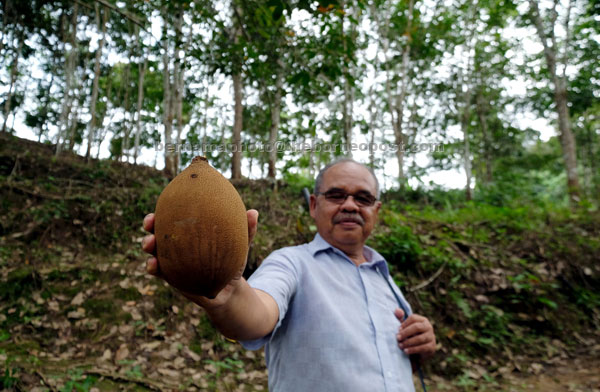 Ahmad Saharuddin showing a kepayang fruit about to be processed for a dish. —Bernama photos

The song streamed from her husband Ahmad Saharudin Kadir’s mobile phone as Ariah, 51, regaled this writer with the pleasures of eating buah kepayang, a little-known fruit that goes by the scientific name of pangium edule.

“The fruit is delicious but one must take utmost care to have it cleansed thoroughly, otherwise you may end up getting intoxicated or worse still, dead,” she cautioned.

The buah kepayang tree is native to Malaysia, Indonesia and Singapore; locally, it grows mainly in the jungles.

The fruit is particularly well known among the people in Jerantut and other districts Pahang, and is treated as a delicacy.

The fruit, which is shaped like a rugby ball, is about 15 to 17 centimetres long and contains about six to eight seeds.

It is actually the creamy content of the seeds that is sought after by kepayang lovers.

However, the seeds are only edible after they have gone through a cleansing process.

This is because the tree’s wood, leaves, fruit and seeds all contain hydrocyanic acid or cyanide, which is a deadly poison. And, according to Ariah, the slimy membrane covering the seeds can cause intoxication if it is not removed.

Seated in the kitchen of her home in Ulu Cheka, here, Ariah showed the writer how to break open the buah kepayang seeds.

Holding a black-coloured seed firmly in her left hand, she uses a pestle to tap on the seed’s hard outer layer to break it open, revealing its yellowish-white contents.

“Here it is, the flesh of the kepayang seed.

Making it edible is a complicated process but the delicious taste of its creamy flesh has made it a family favourite, so I’ve to be diligent and prepare it for them,” she said, using a knife to prise the contents out of the seed. 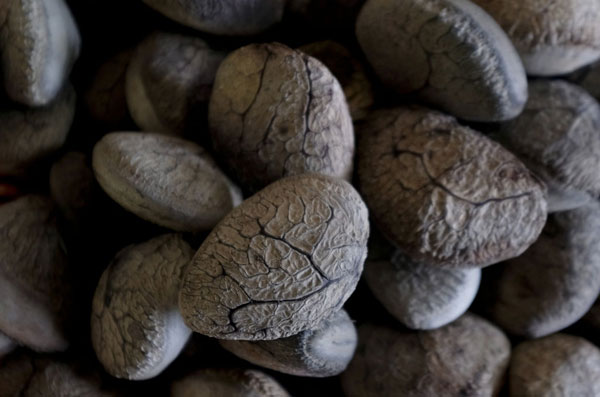 The shell of the kepayang fruit is hard and has to be cracked open to get its flesh.

To make the seeds fit for consumption, they have to be leached of the cyanide and the intoxicating slimy membrane.

To do this, Ariah leaves the seeds on the soil outside her house for up to a week.

Then, they are soaked in water for a day or two but this is the tricky part as the seeds have to be kept submerged in running water.

“Soaking it in stagnant water is not a good idea because it won’t completely remove the intoxicating substance.

“In the past, the villagers used to put the seeds in a basket which is then submerged in a stream or river.

The basket is tied to the riverbank to prevent it from being carried away by the water,” she said.

Once the leaching process is over, the kepayang seeds are boiled for 40 to 60 minutes to make it easier to break open their skin.

Ariah said the fleshy contents of the seed can either be pickled or cooked and served as a tasty snack.

The pickled version is called “gelibor” and the snack “ceman” in the Jerantut district’s local lingo, she added.

To make pickled kepayang, the fruit is cut in half and fermented in brine together with a few pieces of “asam keping” or Garcinia cambogia.

To make “ceman”, the fruit is cut into strips and mixed with salt and crushed turmeric root before they are toasted in a frying pan.

Instead, the strips are toasted to remove the moisture,” said Ariah, adding that her family members enjoy snacking on “ceman” while watching television.

The snack is also available at some hawker stalls in Jerantut and sold at RM5 a cup, she said.

Her husband Ahmad Saharudin, 57, an employee at the state Forestry Department, said when he was young, his mother used to say that the skin of the kepayang seeds should not be discarded outside the house as the chickens might eat them.

“She said the chickens would die if they ate the unprocessed kepayang fruit. However, I’ve not heard of any humans dying after eating the fruit.,” he said.

One of the more senior denizens of Ulu Cheka Mohd Napi Jafar, 74, said he had once seen one of his friends becoming intoxicated after eating the kepayang fruit.

“He must have eaten a fruit that was not properly cleansed,” he said. 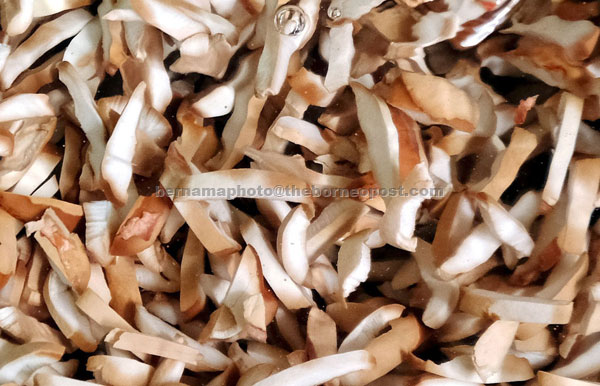 Kepayang fruit cut into small pieces after being soaked for two days in flowing water before they are cooked ‘cemang kemayang’ style. — Bernama photo

The incident, however, did not discourage him from eating buah kepayang.

Alluding to the Malay proverb, “Sayang-sayang buah kepayang, ditelan mabuk, dibuang sayang” (Dearly love the kepayang fruit, can intoxicate when eaten,  but don’t have the heart to throw it away), Mohd Napi said he enjoyed eating the fruit in its pickled form or as a snack because “it’s a pity to turn down food that is so delicious”.

He added that not many people were aware that oil could also be pressed from the kepayang seeds after they were boiled, soaked and dried in the sun.

This oil, apparently, was the secret ingredient that was used to make “nasi kebuli” (an Indonesian-style spicy steamed rice dish), which used to be a popular traditional dish in Lipis, Pahang, in the past.

“Kepayang oil is no longer produced and people who cook ‘nasi kebuli’ these days don’t even know of its (kepayang oil’s) existence.

‘Nasi kebuli’ cooked with kepayang oil has its own unique taste and aroma,” he said.

Ahmad Saharudin, meanwhile, said the kepayang fruit was familiar to people living in Jerantut, Raub and Lipis as it was sold at the local markets.

He said in Ulu Cheka, the kepayang tree can be found growing in the rubber smallholdings.

To the Orang Asli community, the presence of the kepayang tree in any part of the jungle was a sign that the soil in the area was fertile, he said.

“It was believed that the tree only thrived on fertile soil.

“In fact, when I was small, we used to plant corn in the same area where the kepayang trees grew and we always enjoyed good harvests even though no fertilisers were added,” he recalled. — Bernama 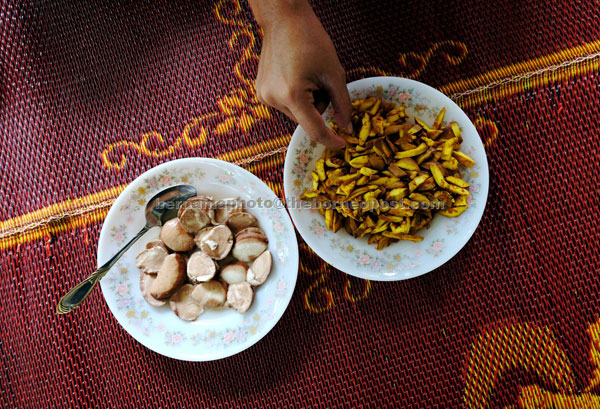