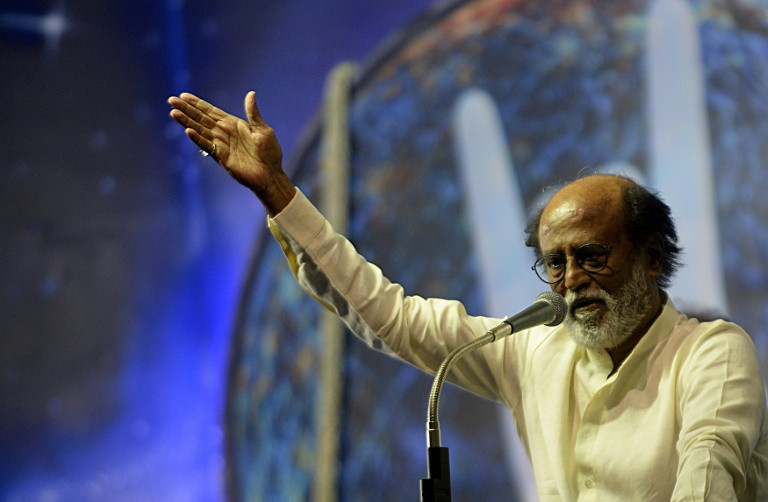 Rajinikanth’s announcement ended a wait of almost two decades for many of his fans, especially in the southern Tamil Nadu state. – AFP photo

Rajinikanth, the wildly popular Indian cinema icon who inspires almost god-like adulation in some parts of the country, announced his entry into politics Sunday.

The 67-year-old actor’s announcement ended a wait of almost two decades for many of his fans, especially in the southern Tamil Nadu state where he is intensely revered and referred to simply as “The Superstar”.
“I will form my own political party and contest from all 234 seats in the next (state) assembly election,” he said in a hall packed with supporters in Chennai, Tamil Nadu’s capital.

The state, home to 72 million people, has been reeling from political instability after the death last December of its charismatic chief minister Jayalalithaa Jayaram, also a former movie star.

Rajinikanth, 67, famously worked as a bus conductor in the southern Indian city of Bangalore before heading to Chennai in 1973 to pursue his passion of acting.

He rose to become the biggest star in the history of Tamil-language cinema.

Rajinikanth is widely credited for almost single-handedly defeating a state government in 1996 by asking his fans to vote it out days before the election.

“I am not doing it for any post or money or fame as I have enough,” he said Sunday.
Many fans let off fire-crackers, danced to drums and shouted slogans for Rajinikanth outside the venue after the announcement.

The entire state of Tamil Nadu goes into a frenzy every time a new Rajinikanth movie is released. Many companies give their employees a day off, expecting low attendance.

Fans cut their hair to look like Rajinikanth’s character, and some even get his face tattooed on their bodies to mark the release of a film.

In Chennai, many fans hand out sweets and even pour milk over giant posters advertising his movies — a tradition that derives from the ritual bathing of Hindu idols in milk. – AFP