Thursday, August 6
You are at:Home»News»Sarawak»Much to look forward to in 2018 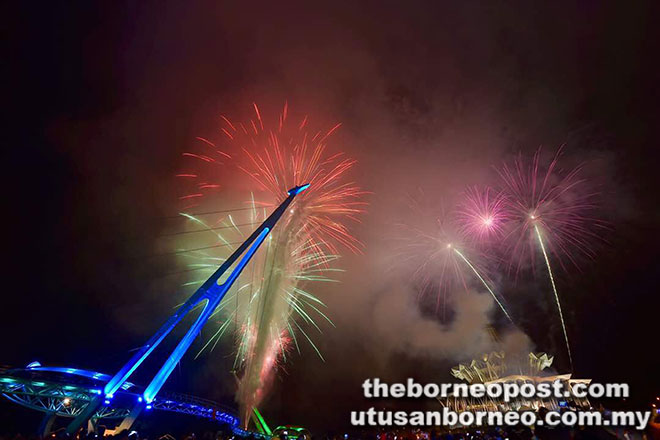 KUCHING: Year 2017 might have started with the demise of former chief minister Pehin Sri Datuk Patinggi Adenan Satem, but during the 2018 countdown last night, Sarawak celebrated the significant milestones and intrinsic spirit that had kept its people and leaders pushing forward.

Fireworks shot skywards from both the state capital’s latest attraction, the Darul Hana Bridge and from the grounds of the State Legislative Assembly (DUN) Complex.

Onlookers cheered – they came early to score the best view of the festivities, their umbrellas forming a loose patchwork canopy under the occasional drizzle and illumination from the bridge lights. The new year blessed this fair land with cool weather and no rain minutes before the clock struck midnight.

The major landmarks around the epicentre of the celebration were brightly lit – the Astana and DUN Complex glowed from across the river.

Earlier upon the arrival of Chief Minister Datuk Patinggi Abang Johari Tun Openg and his wife Datin Patinggi Dato Juma’ani Tuanku Bujang, the night programme kicked off with a fashion show featuring the creations of Anna Sue and Arzmy Hargreaves.

After imparting his words to the spectators, Abang Johari launched a new coffee table book called ‘Colourful Icons of Sarawak’, published by the state Information Department.

This was followed by a video presentation that looked back at the defining moments of 2017 across Sarawak – a reminder that much has transpired and there is much to look forward to. 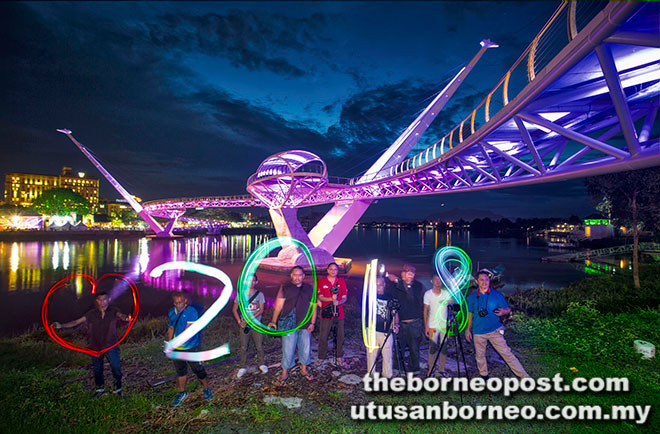 HAPPY NEW YEAR: A group of landscape photographers use a technique called ‘light painting’ to spell out 2018 during the ‘Blue Hour’ — the period of twilight just as the sun rises or sets, with Kuching city’s newest landmark, the Darul Hana Bridge, as a backdrop. Since the bridge opened, it has attracted not only locals and tourists, but also photographers to capture its mark upon the cityscape. — Photo by Muhammad Rais Sanusi