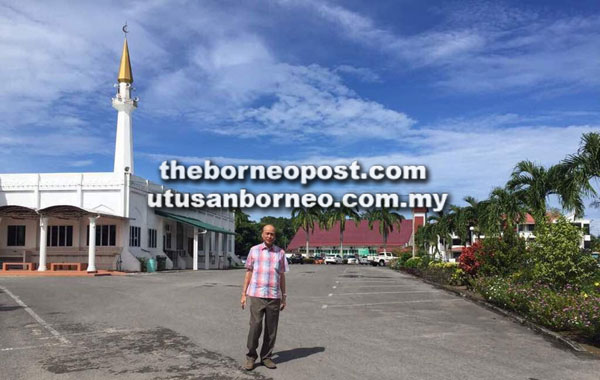 Lee at the car park located between the church and the mosque in Lutong.

SIBU: The uniqueness of a church and a mosque built next to each other in Lutong, Miri has impressed 1Malaysia Foundation trustee Tan Sri Lee Lam Thye.

Lee said such mutual understanding also reflects the very special multi-racial bond amongst people of all faiths in Sarawak, adding it is indeed amazing and worth emulating by others who want to put religious harmony into practice.

“As someone who has been advocating unity and inter-religious understanding, it really warms my heart to see the unity and harmonious atmosphere among the people of different faiths in Lutong, as it actually symbolises the unity that the people in Miri and Sarawak can be proud of.

“It was a memorable experience for me when visiting Miri, Sarawak recently as I had the opportunity to see for myself the uniqueness of a church and a mosque built next to each other in Lutong.”

Standing less than 100m apart in Lutong bazaar, Masjid An Naim and Good Shepherd Church are located about 10km north of Miri City.

Lee added: “On special occasions like Christmas and Hari Raya, the Muslims and Christians will come together for joint gatherings and the special bond developed between them has won praise, including from the Prime Minister Datuk Seri Najib Razak.

“I have to admit that reading and listening to numerous stories on them had made me eager to see the uniqueness myself.

“It was on Sunday morning early last month that I decided to drop by at the carpark in between of Masjid An Naim and the Good Shepherd Church to get a feel of the atmosphere.”

He pointed out what had been said was true and he was very elated to see some of the church-goers walking towards their vehicles which were parked in the compound of the adjacent mosque.

As the Christians had just finished their Sunday service, some of them had also greeted and chatted with him.

“They said that the mosque and church had been sharing car parks for the past 50 years and it reflects the very special multi-racial bond of people of all faiths in Sarawak.

“That is why we could always see the Muslims parking their vehicles in the church compound on Fridays when they are performing their Friday prayers.”

He reiterated that on occasions like Christmas and breaking-of-fast, the Muslims and Christians would also come together for festive gatherings. The church will always prepare halal food for their Muslim friends during such celebrations.

It is not unusual for the mosque committee to share whatever facilities and occasions with the Christians as it is so natural to them that it is part of their daily way of life, he pointed out.

Lee stressed: “Hopefully we can have more churches, mosques and temples sharing facilities with each other, and sharing food and fellowship like families. This special bond must be preserved at all cost and it should become a way of life for us where we could share car parks and meet for gatherings.

“The fact that the Christians and Muslims could hold joint Christmas and Hari Raya gatherings and make it a very special tradition shows that we are indeed one big family, in the true spirit of 1Malaysia.

“The level of understanding and the cooperation between the mosque and church committees and their congregations is rather unique and something that we can attest to. It could help contribute towards greater integration and foster better unity.

“It is indeed an eye opener to all Malaysians and something that will be etched in my mind forever.  It is my fervent hope that Lutong could be a pace-setter and lead as a fine example for similar activities to be carried out in other parts of Malaysia to promote unity and harmony in our beloved nation,” Lee said.