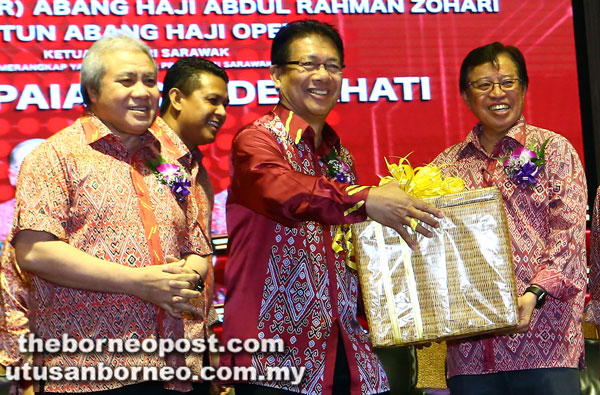 Julaihi (centre) presents a memento to Abang Johari, as Awang Tengah looks on.

Julaihi said PBB Zone 4 also hoped that there would be no contest for the posts of PBB Youth and Women chiefs.

It is understood that Youth chief Datuk Seri Fadillah Yusof and Women chief Dato Sri Empiang Jabu are stepping down in the coming TGM.

“In the meantime, we also fully support the state government under the leadership of Abang Johari to continue negotiating with the federal government to regain our autonomous rights enshrined in the Malaysia Agreement 1963 (MA63).

“We want what is ours given back to us within the context of MA63,” pointed out Julaihi.

He said PBB Zone 4 also wanted the state government to carry on its rural development agenda.

He added that the rural community ought to be well connected via roads, coastal routes, the Internet as well as to be equipped with electricity and water supply.

“Without such connectivity, the rural folk would fall behind in terms of development, while they should deserve what their counterparts in the urban areas have,” said Julaihi.