Thursday, October 6
You are at:Home»News»Sarawak»Lee: Success of co-ops down to management 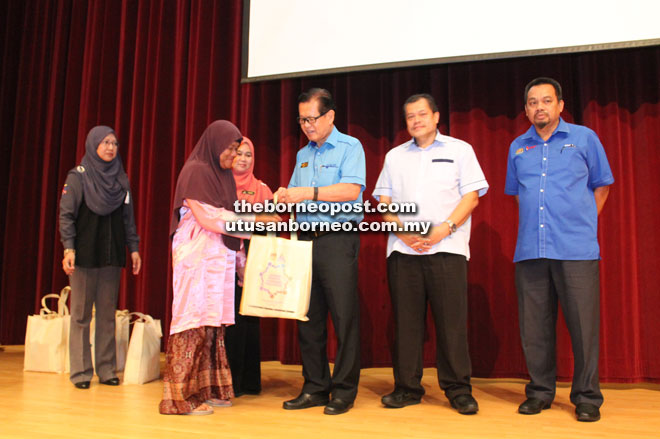 Lee (third right) presents a donation to a recipient, witnessed by Najmah (second left), Abdul Aziz (second right) and others.

MIRI: A cooperative without professional management, or one whose members are always in crisis, has a higher chance of ending in failure.

Assistant Minister of Tourism, Arts and Culture Datuk Lee Kim Shin said many cooperatives failed because their members were more focused on making profit instead of managing them properly.

“If you want to set up a cooperative, you must undergo management training and courses. Most importantly, there must be understanding among all members,” he said when closing a ‘Cooperative Sustainable Human Capital and Financing Opportunity for Entreprenuers Programme’ at Pustaka Miri on Tuesday.

He said the success of a cooperative depends on its systematic and professional management, as well as understanding among members.

“I often hear about cooperative failing due to internal crisis at the management level, and that members do not trust each other,” he said.

Based on statistics of Malaysia Cooperative Societies Commission, a total of 1,002 cooperatives with 320,000 members have been registered in Sarawak as of June last year.

The number is 7.4 per cent of the total number of cooperatives registered in the country, which is 13,648.

“The total shares capital and fees of these cooperatives are more than RM130 million with assets worth about RM558.7 millions. They have generated profit of more than RM140 millions,” Lee said.

The statistics also show that cooperatives in Sarawak are strong in terms of membership.

“To achieve this target, all cooperatives must play their roles to increase their profit by 5 to 6 per cent a year,” Lee said.

The programme also witnessed several less fortunate members of the public receiving donation from MKM, as part of its corporate social responsibility.