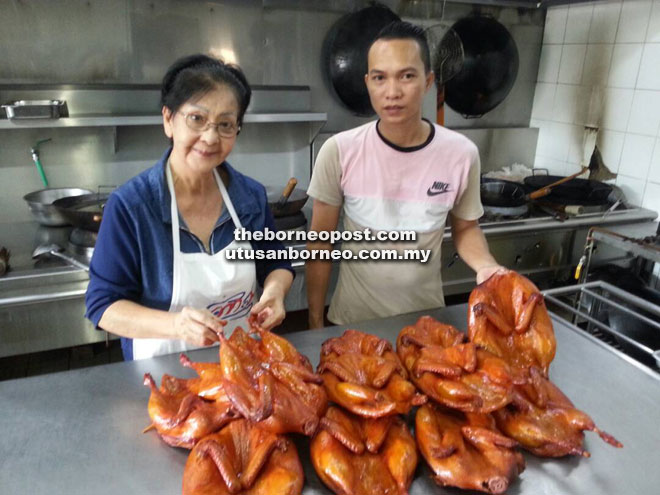 After cooking them in an oven at low temperature for 12 hours, the ducks are left to cool down.

MIRI: The feasting tradition usually practised by the Chinese community shows that people love to enjoy good, delicious food during the Chinese New Year festival, which marks the beginning of a lunar year.

Thus, it is not uncommon for the Chinese to spend a good amount of money preparing for the festive season.

If one is a fan of cured meat, the market currently offers more choices, usually imported from China and Hong Kong.

The selling price of a single cured duck drumstick from Hong Kong could easily reach RM30 to RM50, depending on the size, as the high price is due to rising demand and inflation.

In an attempt to search for a local and affordable cured duck product, The Borneo Post met restaurateur Ung Gek Ing, the first and the only local cured duck maker in Miri.

“I love cured duck meat, and before I learned how to make it, I usually bought the cured product imported from Hong Kong to satisfy my cravings,” said the 71-year-old, who has been producing cured duck meat for nearly two decades.

The saltiness of the imported cured duck could sometimes become unbearable, because a lot of salt is used in the production that usually starts many months before spring, so that it could be ready for export, said Ung.

“So, with more salt content, the cured meat could last longer,” she added.

Ung stumbled upon a chance to visit a cured duck factory when travelling across Guangzhou, China and the experience truly opened her eyes. 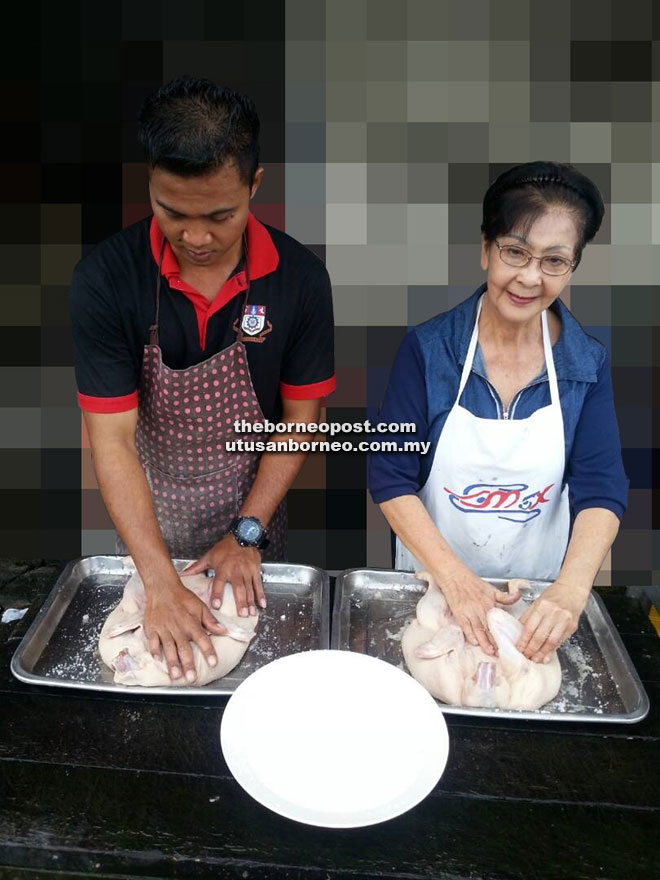 Ung (right), with the help of a worker, is seen marinating the duck.

“Within the short visit, I managed to learn the basic skill of making cured meat and I was determined to come back and make my own recipe of fresh cured duck meat,” she shared in an interview recently.

Using basic ingredients like salt, light soy sauce and herbs which she bought from China, she began making her favourite dish by trial and error.

“I realised that these ingredients cannot produce the taste and scent that I wanted. So, I combined the ingredients with Zhang Cha Tea cured duck recipe, which uses cooked tea leaves. The result – the scent of the end product was so nice, because of the tea leaves.”

Ung explained that the technique typically used by Chinese and Hong Kong factories to produce cured meat is to use uncooked meat, which is marinated and air-dried and then packed for sale.

“My technique is totally different. After marinating it for a day, the duck meat will be cooked in an oven in low temperature for 12 hours. After that, it will be cooled to room temperature and vacuum-packed”

In comparison, Ung said her cured duck is made using local-bred duck, which is tastier, less salty, crunchier and easily cooked with other ingredients like leek or green vegetables.

“My experience with the imported ones is that they have to be soaked in water overnight to soften them, but my recipe requires nothing of such time-wasting procedure because they are ready-to-eat,” she said.

Production time usually starts three weeks prior to Chinese New Year (CNY), with Ung revealing that she sells over 700 cured ducks during every festive season to customers from Miri and different parts of Sarawak, Brunei and Kuala Lumpur.

“There is one customer from Brunei who buys from me every year, and she would bring them to Hong Kong as a gift to her family members and relatives. I am actually overwhelmed with the support from my loyal customers,” said Ung.

Despite her weakening arms and legs, the septuagenarian makes it a point to go down to her kitchen to produce her best recipe of cured duck.

“I don’t want to disappoint my customers as they are the driving force for me to keep doing it every CNY.”

Her other CNY best-sellers are special fish balls and stuffed tofu.

Migrating from Fuzhou, China to Sibu with her family when she was only five years old, Ung believes that her cooking skill is inherited from her father and grandfather.

“I could say that I have been holding the wok and pan for a huge part of my life since I learned the trade at 12 years old.”

When Ung married at 31 to a cook, she followed her husband to Miri and is now rooted in the city for

Discussing on the dining scene in Miri, Ung opined that apart from new cafés and bistros that offer creatively new food choices, the food preference during Chinese New Year is pretty much the same every

“When the young ones come back to their family during the festive season, they long for the same taste they had during their childhood. So, no matter how the world modernises, food has the power to connect one another emotionally.”

Food has become a huge part of her life, she said.

“More importantly, the human touch and connection through food is beyond what words can describe. There are many stories I have heard through diners and it is incredible that they come back looking for me every year,” she enthused.

Previous ArticleLee: Success of co-ops down to management
Next Article Auspicious Canine Year CNY Bazaar to be held for 23 days