Wednesday, February 8
You are at:Home»News»Sarawak»59-year-old man is latest rabies victim
For the freshest news, join The Borneo Post's Telegram Channel and The Borneo Post on Newswav. 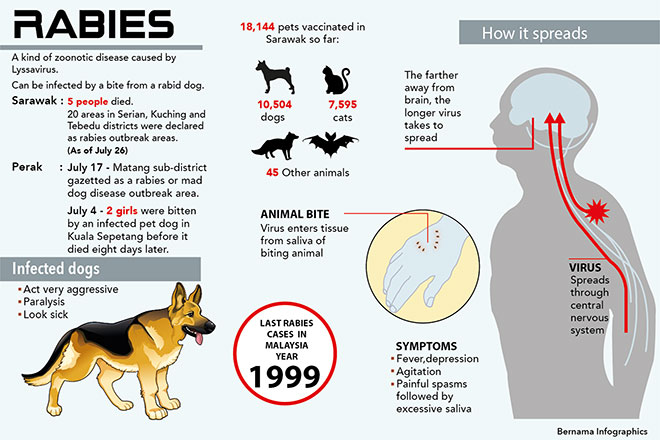 KUCHING: Sarawak recorded its latest human rabies victim after a 59-year-old man from Jalan Batu Kawa – Matang was confirmed to be infected with the virus following a lab test yesterday (Jan 26).

He is the seventh rabies victim after the last case in August last year involving a seven-year-old boy from Kampung Kuala, Gedong.

Sarawak Disaster Management Committee (JPBN) in statement issued today said it was notified of this latest case by the Sarawak Health Department.

It said the man had a dog bite history on November 27 and sought treatment at a private clinic the same day but he was not referred to government medical facility to receive vaccination.

“On January 20, the man experienced pain and weak limbs, and was admitted to a private hospital on January 24.

“The next day, he was referred to Sarawak General Hospital for further treatment after showing signs of hydrophobia, hallucination and aggression,” said the statement.

JPBN also revealed that Sarawak Health Department today issued a warning letter to the private clinic for failing to report the dog bite case and failing to refer the case to any government clinic/ hospital.

JPBN also reminded medical practitioners in the private clinic and hospitals in Sarawak to adhere to the Guidelines on Handling Dog Bites and Other Animal Bites, including to refer cases to government medical facility.

It said the Sarawak Health Department today also issued letters reminding all private clinics and hospitals to immediately report cases of bites by dogs and other animals to the dearest Health Office in order to save lives.

Five persons including two young siblings from Serian have so far died from rabies since June last year.

The sixth case, a seven-year-old boy from Kampung Kuala, Gedong, is still being treated in SGH.