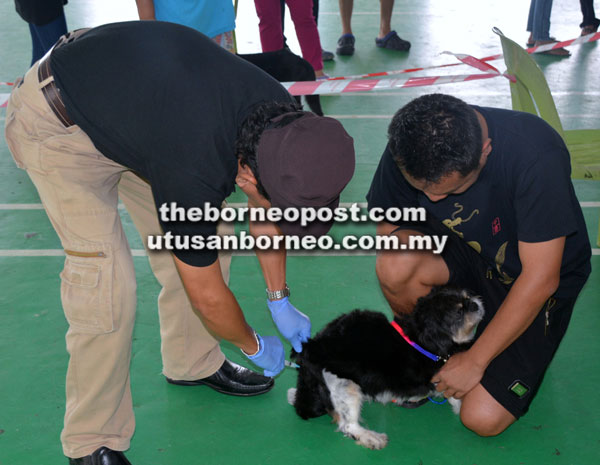 A statement issued by Sarawak Disaster Management Committee yesterday said the vaccination programme will be carried out by the Department of Veterinary Services (DVS).

Members of the public with pet dogs yet to be vaccinated are advised to get the vaccination at these venues held from 9am to 2pm.

The statement also mentioned that the total number of vaccinated pet animals so far are 44,769 comprising 36,737 dogs, 7,987 cats and 45 other animals.

It advised pet owners to immediately contact the department at 082-612949 or 082-611607 if they notice any behaviourial changes in their pets.

Dog owners are also being warned that they risk getting a fine and even jail term for letting their dogs roam freely in areas that have been gazetted as rabies infested areas.

Fifteen of those cases involved pet animals (nine by dogs and six by cats) while the other six cases involved bites by stray animals (three by dogs, two by cats and one by a mouse).

All those bitten were given anti-rabies vaccination. So far, the cumulative number of reported animal bites since April 1 last year is 6,158 cases with 2,431 of those affected vaccinated.

JPBN also advised anyone with a history of dog bites to go for check-up at the nearest medical facility immediately.