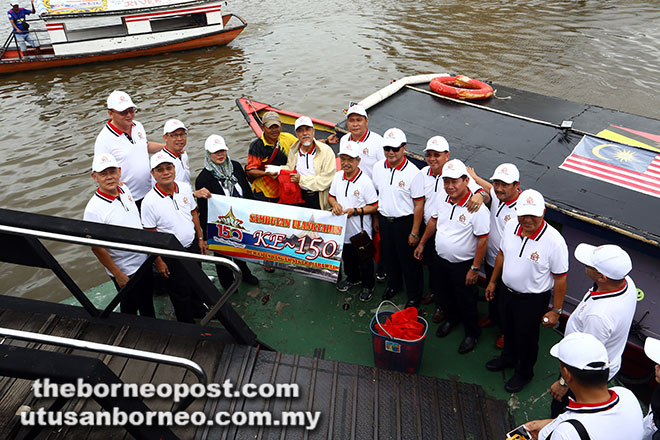 KUCHING: The Barisan Nasional Backbenchers Club (BNBBC) along with Sarawak United National Youths Organisation (Saberkas) handed out 1,000 gift bags to members of the public during a walkabout at Kuching Waterfront yesterday.

The walkabout, led by State Legislative Assembly (DUN) Speaker Datuk Amar Mohamad Asfia Awang Nassar, was run in conjunction with the 150th anniversary of the DUN.

Apart from the gift bags, the BNBBC also gave away RM200 to each of 30 boat operators at the waterfront. Moreover, the club also donated RM3,000 and RM2,000 to Kuching Division Journalists Association and Saberkas Sports Club, respectively.

In a simple address, Asfia said Kuching Waterfront is connected to DUN Complex via Darul Hana Bridge, making the DUN building unique in the country.

“There is no DUN building in Malaysia like this one.”

Asfia also pointed out that from Carpenter Street, many people  might get the impression that the DUN Complex is located on the Kuching Waterfront side.

“If you walk along Carpenter Street, you might think that the building is on this side of the river,” he said at the Godown Theatre here.

Asfia took pride in saying that the DUN Complex is located along the Sarawak River, which ‘is the witness and testimony of the history of Sarawak’.

He said Sarawak River witnessed the arrival of Sultan of Brunei and Sir James Brooke, as well as the farewell of the last British Governor of Sarawak, Sir Alexander Waddell.

Asfia believed that the future of Sarawak ‘is bright because ours is the oldest and the largest DUN’.

Previous Article‘Internet infrastructure continuously upgraded’
Next Article France in favour of no ban, no discrimination against palm oil — Minister