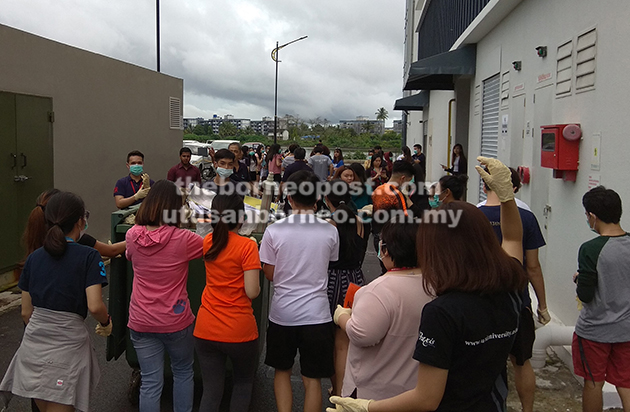 KUCHING: The average Kuching resident throws out 800g of waste daily leading to a whopping 690,000kg of waste being generated in the city every day.

“There are three types of waste groups, namely municipal waste, scheduled waste, and clinical waste. All this waste has an impact on the environment.

The talk was part of ‘The Empowerment Series’ jointly organised by Yayasan Perpaduan Sarawak, the Sarawak  Development Institute, and The Champions.

Timothy pointed out that the sanitary landfill used by Trienekens may not last its projected 25 years.

“Some 125ha of land has been converted to manage waste and the landfill we have now is supposed to last 25 years. But at the rate that Kuching is going, we are going to have less than that. And once this landfill is filled, we cannot do anything but leave it as a park.

“You may walk in the park and say ‘Hey, this is nicer than the Friendship Park’ but you know what’s at the bottom,” he said.

According to Timothy, half of the 1,800 rivers in Malaysia are polluted or damaged by waste pollution.

He said 300,000 tonnes of waste, which was enough to fill 100 Olympic-sized swimming pools, is dumped into the country’s rivers annually.

In Kuching, he said Sungai Tabuan was a severely polluted river.

“Thanks to NREB (Natural Resources and Environment Board), Sungai Tabuan is much better now,” he said, while showing images of the rubbish-filled river.

Timothy called on Kuching folk to start reducing the waste they generated and to practise recycling.

He cautioned that if a person were to dump clinical waste into the river, it would be consumed by the fish, which would then be tainted when consumed by man.

Some 80 UCSI University students took part in the session that aimed to educate them on the reality and nature of waste.

Participants also learnt about waste segregation, a hands-on process where they were shown how to separate waste according to the different categories.