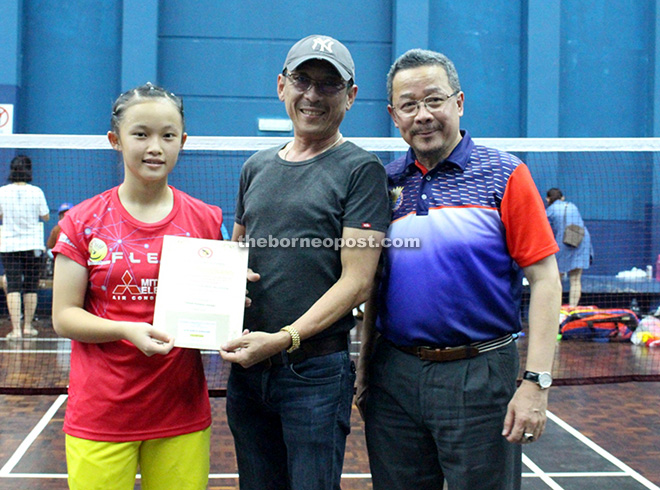 MIRI: Rising star Wong Ling Ching is eyeing a place at Bukit Jalil Sports School (BJSS) in Kuala Lumpur where she can be expected to bring her game to another level.

This is because the quota for Sarawak has to be used and Hadi has strongly recommended Ling Ching.

“Wong Ling Ching is one of the few Sarawak girls who has done well in the national circuit. She was national girls U14 singles number one player last year and this year she has moved up to Girls U16 category,” he said when met at the recent Sarawak Junior Closed (1st Leg) Badminton Championship at SBA Badminton hall.

According to Hadi, the 15-year old Riam Road Secondary School Miri student had in fact received the offer from BJSS but there was a long list of candidates waiting to get into the school.

“Ling Ching deserves to be in BJSS. She has the commitment, the skills and the right attitude to be there. She may have to hopefully grow taller but if she can’t, she will be the likes of world champion from Japan (Akane) Yamaguchi.

“It’s just a matter of having the right attitude, undergoing very, very hard training and being fully focused,” he added.

“She may even be exposed in Sukma (Malaysia Games) because we do not have many girls players at the moment. Kashley Kho is another talented player who can go further provided she has the right mindset.

“I have spoken to the mothers of both players and they are fully in support of SBA’s efforts. We are looking for sponsors to send them for exposure,” said Hadi.