Sunday, July 5
You are at:Home»Features»Singing a sweet tune 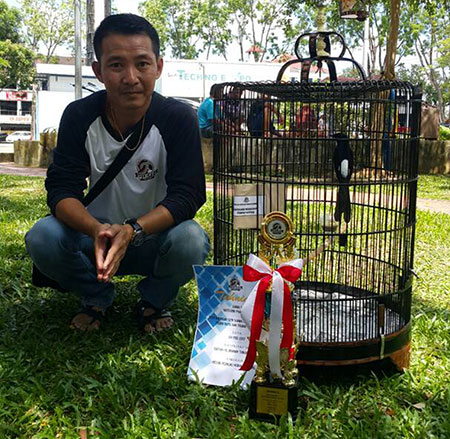 Ch’ng and his pet bird after winning a competition in Kuching last year.

PEOPLE keep birds as pets for their beauty, their cute behaviour and, most of all, their songs.

There is, of course, a difference between birdsongs and birdcalls. The former let out a melodious sound while the latter, a sharp specific tone.

In most bird species, only males are known to sing – usually songs of love – each with a specific tone and style to let the females, which they are attracting, know they are of the same feather.

People like birds so much that there is even a hobby known as birdwatching, where enthusiasts armed with binoculars and cameras go outdoors or into the bush or forest just to watch birds in their natural habitats, recording details such as the circumstances when and where they were seen.

There is also another hobby where birds are entered by their owners for singing competitions.

Cages, each with a single male bird, are lined up at a certain distance from each other to encourage the birds to sing.

This would trigger the birds’ instinct to either make mating or territorial calls. The winning criterion is determined by the frequency of calls in a set time. 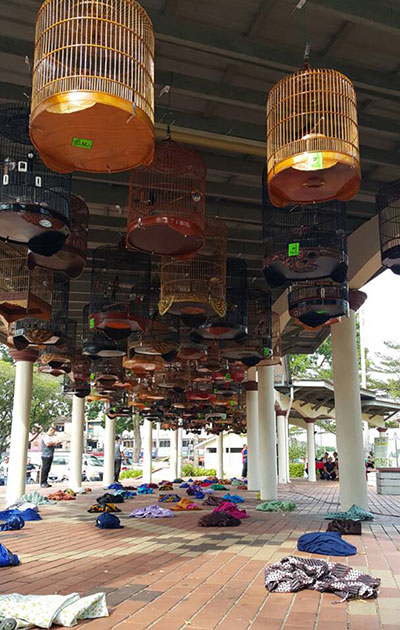 In a bird singing competition, cages, each with a single male bird, are lined up in a row at a certain distance to encourage singing.

Tony Ch’ng of Kuching picked up the hobby of keeping birds as pets about five years ago. Today, he has a menagerie of 25 birds and counting, and they include ochraceous bulbuls (Burung Kapas Tembak), white-rumped shamas (Murai Batu), Oriental white-eyes (Mata Putih), lovebirds, canaries (Kenari), and robins.

At first, he had no interest in keeping birds as pets. Then one day, its singing wowed him so much that he began to take notice of its rich and melodious calls (with a wide repertoire) and its endearing behaviour.

“It’s one happy bird and sings every morning,” he said.

In the wild, the white-rumped shama does not mimic other calls but tries its best to innovate new calls and this quality makes it even more attractive as a cage bird and to breeders.

After that encounter, Ch’ng’s interest in aviculture grew and after a few months, he began to buy some more birds. Two years later, he owned a 20-strong aviary.

Ch’ng shared his bird-keeping interest on social media, especially Facebook, through which he got to know fellow bird enthusiasts, both local or from overseas. They swapped tips on how to take care of their pennate songsters.

“In fact, there are many people around here who keep birds as pets. The big number of participants at a local bird singing competition is proof of this. The thing is that they don’t organise to connect with one another at ordinary times,” he noted. 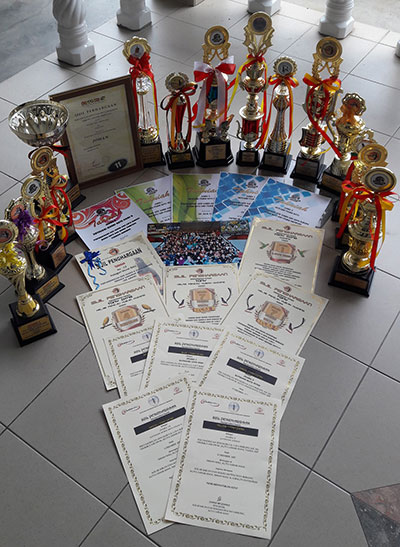 Photo shows the trophies and certificates Ch’ng has won from bird singing competitions.

According to Ch’ng, quite a number of local bird clubs have now been formed. He himself is treasurer of Kelab Pekicau Kubah Kuching, which currently has 11 active members.

He said every Sunday around 2pm, bird enthusiasts would bring their feathered pets in attractive cages to Taman Kejiranan, Tabuan Jaya, for a chirpy get-together.

“The owners mingle and chat while the birds are exposed to the songs of other birds. This is to encourage the birds to learn to sing,” he added.

Ch’ng pointed out that keeping birds as pets is itself an engrossing pastime but sending birds for singing contests requires even more effort – the preparation and the anticipation, among others, all add up to what he calls a “bonus excitement”.

He said it was about two years ago that he first took his pet birds to a competition held in Miri by Kelab Pekicau Miri. And since then, his winged divas have taken part in over 20 state-level competitions and won many prizes, including champion trophies.

Last December, he entered them for the Liga Kicau Mania Indonesia in Pontianak. Although they did not bring home any trophies, Ch’ng wasn’t disappointed, saying the experience and the opportunity to get to know many more bird lovers was well worth the trip.

He also picked up a favourite byword of bird enthusiasts at the competition, “Aku bukan orang kaya, tapi hobi aku mahal” (I’m not a rich person, but I have an expensive hobby).

This is true to some extent because keeping birds as pets can be a costly pastime. Some birds are not very expensive to buy but can cost quite a sum to maintain and care for, including visits to the vet.

According to Ch’ng, local bird singing competitions are held every now and then but mostly on a small scale – that’s why not many people know about them.

Such mini events are not widely publicised – only the bird hobbyists themselves would know through social media.

Ch’ng also pointed out that generally, bird keepers are not really keen on wide media coverage for such events as they were aware of objections to birds being kept in cages. Remarks like “it’s an unkind thing to do” and “birds should be free” are common.

“I have heard comments about bird singing competitions – that birds don’t belong in cages or people’s homes but to the trees and the sky. Bird keepers have also been accused of being ignorant, inhumane and the like.”

Offering an explanation, Ch’ng said pet birds are usually descendants of other pet birds, adding that they are home-bred and hand-raised, unlike wild birds taken out of their natural habitats.

He stressed that personally, he does not hold with capturing birds from the wild as that would be like “kidnapping” them from their nests, which could cause them undue distress.

Besides, he noted, trapping birds from the forests would also contribute to the decline of the population of wild birds.

“However, there is another thing to bear in mind – that birds, bred and reared by people, do not know how to live as wild birds.

“They do not have any skills to find food or avoid predators in the wild, and are also not accustomed to the elements.

“They have lived in people’s homes with friendly cats or dogs. Thus, setting them free is a death sentence for them. Is that what we want for the birds?”

Ch’ng pointed out that the species of birds usually kept as pets are intelligent and easily form strong bonds with their keepers.

“Sending them out to fend for themselves is one sure way of causing them anxiety and grief of separation.”

He recalled the times when his pet birds flew off while he was cleaning their cages, saying, “They would land on nearby trees but after a couple of hours, would return to their cages.”

Ch’ng believes the cage represents comfort and security compared to the disorienting wild outdoors – and the strong bond the birds already have with him made them return to the cage – or nest.

He argued if keeping birds as pets is considered mean, then what about keeping all the other kinds of pets like rabbits, fish, insects, reptiles and more.

He believes as long as the pets are taken care of properly, the issue of cruelty should not arise. 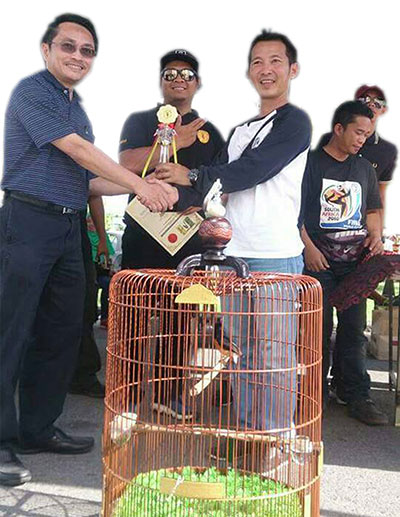 Ch’ng and his pet Murai Batu Kepala Hitam win ‘The best of the best’ category in a bird singing competition in Miri last year.

“That might sound like an overstatement but the fact is that responsible bird owners will provide lots of care, interaction and exercise for their pet birds.”

He always makes sure the cage size is appropriate for each species, the cage is kept clean and not exposed to too much heat or cold and there is enough food and water for the birds.

The father of four said his eldest daughter, Audrey, 12, has picked up some interest from him in rearing birds and she has a lovebird called Blue, which is a four-time champion in local bird singing competitions.

Ch’ng said his wife, Jane, was at first against the idea of him taking up aviculture, insisting it was a waste of time.

After a while, she realised it was not such a bad pastime after all and gradually relented. Now together with their children, she supports Ch’ng by accompanying him to every bird competition.

Ch’ng admitted he is very protective of his “winged family” and would not reveal their whereabouts to strangers.

He fears they might get stolen, saying bird thieves always target songbirds because they can easily be sold for a good price due to the high demand.