Saturday, December 3
You are at:Home»News»Nation»Choose a government that can deliver — PM 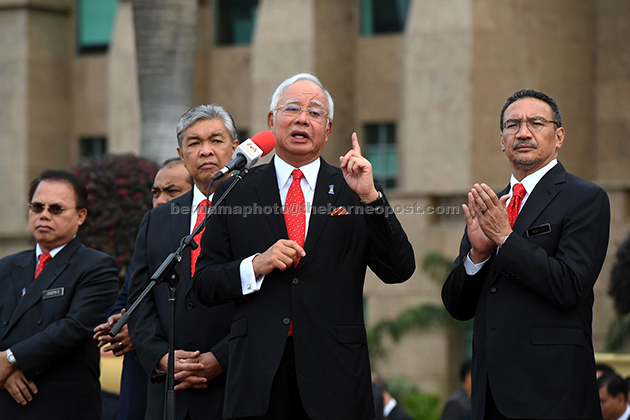 PUTRAJAYA: The people have a crucial decision to make this year in determining the government that is able to lead the country forward while prioritising their interest, says Datuk Seri Najib Tun Razak.

At the monthly assembly for the Prime Minister’s Department at Dataran Perdana here yesterday, he also reminded civil servants to carry their responsibility competently, efficiently and with integrity in realising the government’s every initiative for the people .

“If we take things ligh tly and contribute instead to the problem without any solution or depend too much on red tape, we won’t be able to fulfill the needs of the people,” he said at the first assembly this year for the department.

The assembly last month was postponed due to the weather.

He said the government under his leadership had fulfilled 97.6 per cent of the ‘aku janji’ (pledge) it made five years ago to the people, which would not have been possible without close cooperation among the civil servants.

“This is something we must preserve and strengthen because civil servants are the backbone in the government’s aspirations for Malaysia,” he said.

Najib who is also Finance Minister said the country had scored many achievements, the latest being the World Economic Forum which placed Malaysia as best country in Asia in its Inclusive Development Index.

According to him, Malaysia was ranked 13th in the world and number one in Asia while China is 25th and India, 62nd.

He said the Ringgit had also strengthened, breaking the RM4 psychological barrier on Jan 5 to be among currencies that recorded best performance in the world.

The prime minister also noted Securities Commission chairman Datuk Seri Ranjit Ajit Singh’s attribution to the strengthening of the Ringgit to foreign investment based on confidence in the country’s policies, besides the increased oil price.

“This is the sentiment that we can see and this year we will implement Budget 2018, which is inclusive, with something for everyone,” he said.

Describing 2018 as a special year, Najib said he and his deputy Datuk Seri Dr Ahmad Zahid Hamidi would work harder.

Najib who performed the umrah last December also shared his  experience about meeting many Malaysians at Masjidil Haram in Makkah and Masjid Nabawi in Madinah.  He said this showed that Malaysia was not a failed state and not on the verge of bankruptcy as alleged by certain quarters. — Bernama