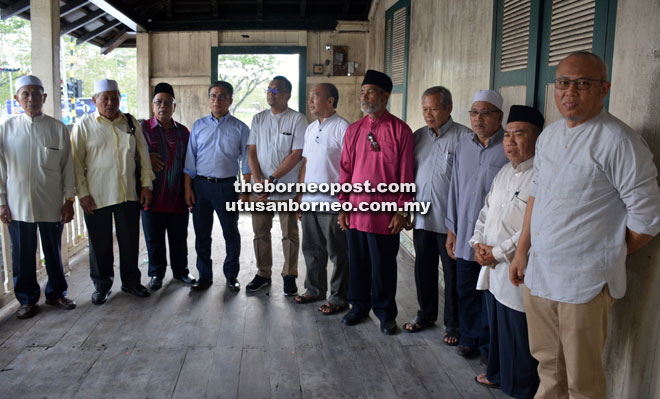 Dr Annuar (fourth left), Latif (right) and others gather for a photo session at Masjid Al-Qadim in Sibu, which is still under restoration works.

SIBU: Masjid Al-Qadim at Kampung Nyabor Road here – said to be among the oldest mosques in the state – now has a new minaret.

The new 9m structure was erected on the compound of the 180-year-old mosque recently, with the help of a crane.

It is said that the old minaret was demolished around 80 years ago to pave way for development.

“The local Muslim community has requested for the minaret to be rebuilt. So, what we witness here is among the measures to restore the historic Masjid Al-Qadim, which has been gazetted by the state government as a heritage building,” he told reporters at the site, where Sibu Islamic Welfare Trust Board (Lakis) secretary Jamil Julaihi and Masjid An-Nur management committee chairman Latif Coupon were also present.

“The mosque has undergone the first phase. The second phase is set to commence either this month or in March.

“So, it will take another year to complete the restoration works on the Mosque,” he said, adding that the cost for the entire project was RM2.5 million.

Dr Annuar, who is Nangka assemblyman and also Sibu Lakis chairman, admitted that there were issues and challenges in ensuring that the works would retain the originality in the design of the building, adding that the restoration process was very complicated and any issue must be looked into and resolved meticulously – even before the start of the project.

The assistant minister also called upon the local Muslims to be patient as the restoration works would take quite some time to reach completion.

To a question on ‘kiblat’ (direction of the Kaabah in Mecca, where Muslims face during their prayers), Dr Annuar said when the mosque was built some 180 years ago, the direction of the sun might have been used to determine the ‘kiblat’.

In this regard, he said he had sought assistance from the state Islamic Affairs Department (Jais).

“They (Jais) have informed us the present ‘kiblat’ is slightly off – it should be more than three degrees (from the original measurement). We will follow that (calculation by Jais),” he said.

For the record, the consultant for Masjid Al-Qadim restoration project is University College of Technology Sarawak (UCTS).

Historically, the mosque was built before the White Rajah era – probably in 1890s. The ‘belian’ (ironwood) was extensively used during its construction then, when the mosque had thatched roof.

“Maybe after this (restoration of Masjid Al-Qadim), I would also look for the heritage buildings of the Melanaus and the Ibans to be rebuilt in Sibu – as a show of strong racial unity and solidarity in this town.

“The main objective is to ensure that the future generations would know about the history of Sibu, and also the symbol of unity among people from diverse backgrounds,” Dr Annuar said.