Monday, August 10
You are at:Home»Sports»Golf»DGCC to host six major golf events this year 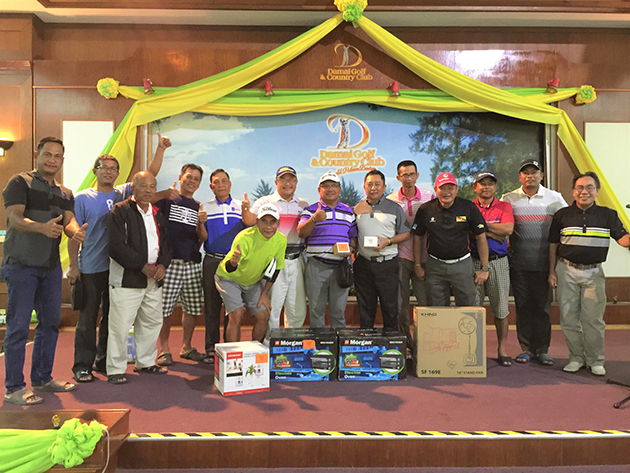 The winners of the DGCC Monthly Medal (February) golf tournament together with their prizes after receiving it from Roslan (sixth right) during the closing ceremony.

KUCHING: Damai Golf and Country Club (DGCC) is set to host six major events in 2018 and to offer the best golfing experience to all the participants including those from overseas.

This was disclosed by DGCC general manager Roslan Mohd Salleh who had expressed enthusiasm for the club’s calendar of events will attract both the local and international golfers including those from Indonesia and Brunei.

He said this during the closing and prize presentation ceremony of the recent DGCC Monthly Medal Golf 2018 tournament which received encouraging response from members who had to brave the wet weather and strong winds.

According to him, the organising of the inaugural Sarawak Junior Amateur Open on Mar 20-22 will also enable more young golfers to try out the challenging course at DGCC and to encourage them to compete against their counterparts from other countries.

“We will once again be hosting the Kuching leg of the PGM-MNRB Sarawak Golf Championship 2018 on Sept 12-15 which is part of the prestigious Asian Development Tour (ADT),” Roslan enthused.

He added that the club will

also be one of the hosting venues for an inaugural international amateur inter-team golf championship which will be participated by at least five different countries and the event is tipped to be a signature golf tourism tournament organised locally.

Meanwhile, Iskandar Mat Jani bagged his first golf title of the year after he emerged as overall champion in the DGCC Monthly Medal (February) golf tournament with a nett score of one-under par 71.

He scored an eagle over the club’s Mountain Hole 17 and a birdie to beat Zekaria Hussaini into second placing with a score of 73 on count back (OCB).

The third placing was won by Mohd Fauzi Mohamat while Mohd Kassa Dollah and Anwar Sahabuddin finished in fourth and fifth placings respectively.

The gross title was won by Roslan himself with a score of 82 while Yakub Ramli and Haidi Ramelan finished second and third respectively.

The fourth placing went to Sulaiman Ganti while Abdul