Tuesday, February 7
You are at:Home»World»Defiant Duterte says he cannot be tried by war crimes court
For the freshest news, join The Borneo Post's Telegram Channel and The Borneo Post on Newswav. 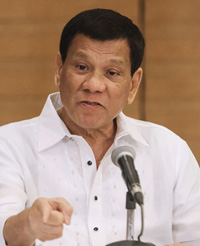 DAVAO, Philippines: Philippine President Rodrigo Duterte on Friday declared himself beyond the jurisdiction of an International Criminal Court probe into thousands of deaths in his ‘drugs war’, claiming local laws do not specifically ban extrajudicial killings.

In a typically bombastic speech Friday, a day after the ICC announced a preliminary inquiry into alleged crimes against humanity, Duterte renewed an earlier threat to withdraw the country from the world’s sole war crimes tribunal.

Duterte, who has overseen the bloody anti-drug crackdown since taking power in 2016, acknowledged that a previous Manila government ratified the treaty that established the ICC, but claimed it had not passed into local law because of a technicality.

“There is no f**king provision of extrajudicial killing. It is not defined anywhere so how can you now accuse me of a crime,” said Duterte, speaking in his home city of Davao.

Police said they have killed nearly 4,000 drug suspects dead in the narcotics crackdown, while rights groups claim the toll is around three times the numbers given by authorities.

The outspoken Philippine leader, who is accused of stoking the killings with inflammatory statements, took issue over the Philippines becoming the first southeast Asian nation put under a preliminary examination by the ICC prosecutor.

“There are so many massacres happening in all parts of Asia and you pick on me. You better clear that up because I will withdraw from the ICC,” he warned, echoing an earlier threat.

The ICC’s initial inquiry is designed to help prosecutors determine if there is enough evidence of crimes that fall into its jurisdiction. It could lead to a full probe and eventually charges.

Roque said a United Nations special rapporteur on extrajudicial killings in 2007 investigated Duterte’s role in 1,069 alleged death-squad killings in the southern city of Davao while he was mayor.

The mission did not lead to Duterte’s prosecution and Roque said the president expects the same outcome.

Duterte won a landslide victory in 2016 elections largely on a pledge to eradicate drugs.

In addition to the official toll, authorities are also investigating some 2,000 other cases of ‘drug-related’ killings by unknown suspects.

The ICC on Thursday announced the unprecedented decision to launch two inquiries at once, one in the Philippines and a second on alleged abuses during Venezuela’s political unrest. — AFP