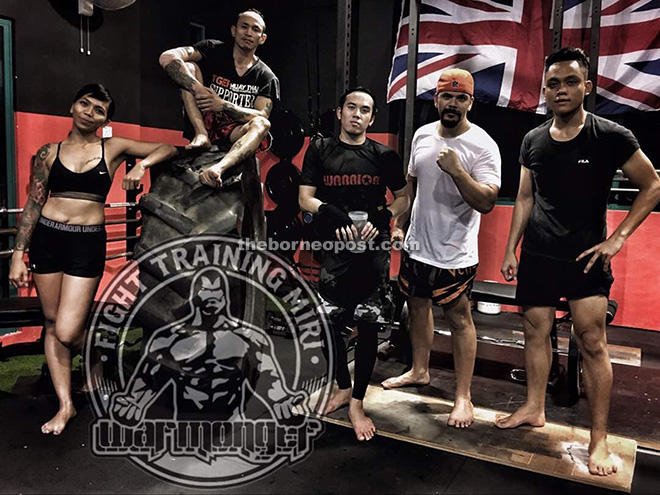 The fighters and coaches after training (from left) Emillia, Trevor (head coach), Fadzly, Gavin and Colin.

MIRI: A passionate group of exponents are out to make Miri become a powerhouse in Sarawak for Muaythai and Brazilian Jiu Jitsu (BJJ). The resort city currently has only two gyms – Warmonger Gym and D30 Gym – which are actively promoting the two martial arts both as a competitive sport and a healthy lifestyle.

Coaches and fighters such as Gavin Ghia Mattu, the Lakai brothers (Nathanial and Nigel Parril), Trevor Salang (Miri Muaythai Association president), Tingang Bulan and Emilia Rajeli are among those who have brought martial arts glory to the city, division and the state over the past four years.

Their latest success came last December in a two-day tournament in Kota Kinabalu, Sabah which has a well-established Brazilian jiu jitsu community with many gyms and experienced instructors.

Fadzly defeated Russian Dennis Nosaev to win the 64kg international invitational category while Uqail thumped Roslan Johani to take the 65kg Superfight title. And then there was Colin Ligok who lifted a trophy in the Bintulu Cup also last year.

Between 2014 and 2016, Warmonger Gym had also chalked up a string of championship victories in the TYT Cup, CM Cup and Samarahan Cup, amassing a total of 16 gold, six silver and seven bronze medals from various tournaments to date.

Gavin, who is fitness coach, attributed their success to the dedication of the trainers and fighters as well as their systematic training regime.

Nathaniel Lakai started practising martial arts back in 2014 when he was doing National Service.

“A teacher named Simon showed me some aikido wristlocks.

“I was intrigued by the way he manipulated my whole body – by just controlling five per cent of it.

“After that, I went to Kuching to further my studies but couldn’t find an Aikido gym.

“I did some research and found Studio 23, a Brazilian jiu jitsu gym, headed by Albert Lim. And it took off from there,” the 23-year-old recalled.

He wants to project Muaythai and BJJ in Miri from a positive angle, saying it is not about some rough guys trying to knock the daylights out of each other but a sport that promotes health, discipline, respect and self-defence.

“It’s brain over brawn and those who understand how the human body works always have the upper hand. It’s a thinking man’s sport.

“If everyone looks at it from this perspective, it can get big in Miri,” said Nathaniel, a jui jitsu pioneer in Miri.

Meanwhile, Emilia Rajeli views and practises Muaythai and BJJ as a good way to promote health and learn self-defence.

“The reason why I am determined to compete is to challenge and improve myself. I believe you can go further in this way,” said the 30-year-old, a Tang Soo Doo exponent and a single full-time working mother who trains eight hours a week.

Gavin Ghia Mattu, who has a passion for Muaythai and BJJ, first trained at Legion 13 and Dan’s Muaythai Gym in Perth, Australia, in 2005.

Upon returning to Miri, he teamed up with Trevor Salang and Tingang Bulan to start Warmonger Gym.

“My aim is to help people achieve goals – whether for fat loss, muscle gain or self-defence – and see Miri become more famous for its martial artists as well as for the health benefits, discipline and self-defence skills that martial arts bring to the individual to help the community become stronger and safer.

Gavin, a Mixed Martial Arts (MMA) conditioning coach and a personal trainer, added that besides competing in tournaments, fighters from the Gym also participated in charity events to give back to the community.

In 2017, they took part in a children’s charity event and a health and fitness carnival, organised by Miri Hospital, where they gave public demonstrations of martial arts.

Among the competitions they are eyeing in 2018 are MIMMA (Malaysian Invasion Mixed Martial Arts) 5 Semifinals in Feb in Kuala Lumpur (Feb), the Elopura Fight in Sandakan, Sabah (March), the Sabah Grappling Question 2 in Kota Kinabalu (April) and the Stand K1 Tournament also in Kota Kinabalu (June).

In promoting Muaythai and BJJ, Gavin stressed that both are safe for anyone to learn.

“Only those wishing to compete have to spar with one another. Mostly, these martial arts involve good exercise and learning disciple,” he said.

As for those keen on competition, the 32-year-old has this to say:

“Hopefully, Miri City can become the powerhouse of Muaythai and BJJ for Sarawak. We will continue to train local talents to become world class fighters.”